“Every drop counts” is not just a slogan: decentralising water supply and sustainable sanitation models

“Safe and readily available water is important for public health, whether it is used for drinking, domestic use, food production or recreational purposes. Improved water supply and sanitation, and better management of water resources, can boost countries’ economic growth and can contribute greatly to poverty reduction.”

The importance of available, clean fresh water is essential to the health and prosperity of every community. Globally, over 2 billion people depend on a drinking water source that is contaminated with feces. As a result, annually there are roughly 485,000 deaths caused by health complications due to contaminated drinking water. The strain on the global freshwater resource is credited to the world’s urban areas in general and their respective domestic households (Schuetze and Fandiño, 2013). Figure 1 displays the urban growth in developed and less developed countries. 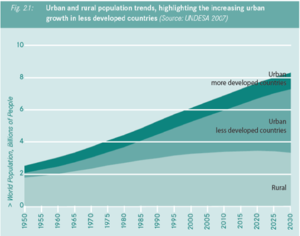 Across the world, waste water and water supply systems are being put under pressure by the combination of rapid urbanization and population growth in urban areas and increasingly frequent extreme climate events due to climate change– particularly longer and more intense periods of drought, flash-floods, sea-level rise. Less fresh water is available for increasingly dense populations, while aging infrastructure is put to the test with ever-increasing amounts of waste and stormwater. As such, efficient and effective water and sanitation systems are an absolute imperative for developing healthy, sustainable, and equitable communities.

What is the issue with our existing water and sanitation system?

The existing water and sanitation systems found in urban areas today tend to abuse the planet’s available freshwater while neglecting opportunities from accessible renewable secondary sources. Figure 2 illustrates an example of a conventional water and sanitation system. The main sources of freshwater in most cities are that of nearby water bodies or from groundwater. However, as urbanization intensifies so does the increase in non-permeable and extensively watertight sealing of urban areas using asphalt and concrete. This sealing results in a lack of groundwater recharge, as well as an increase in flooding risks and pollution of surface waters caused by runoff.

A proper sewage system plays a key role here. With combined sewage systems, rainwater runoff and wastewater from households and industrial buildings are mixed together, making it difficult to benefit from either one. Contrary to popular belief, wastewater can be a valuable commodity. Yellow water or urine, for example, is rich in nitrogen, phosphorus, and potassium; nutrients that are beneficial for agriculture. This effluent can be used as a substitute for chemical fertilizer, both ensuring a proper reuse of wastewater and aiding in agriculture and horticulture production. As a consequence, the re-use of treated wastewater can help revitalize urban rivers as well. Treatment of wastewater is another area that is currently in need of review, since treatment currently uses non-renewable energy and chemical processes that are not sustainable and place a toll on the energy demand grid.

Water saving households are the starting basis for sustainable water use. Countless policies and practices can be utilized to ensure a decrease in the demand for water consumption in urban households without significant investment cost. These interventions can be done in new construction projects or retrofitted to remodel the existing water and sanitation system of existing structures. 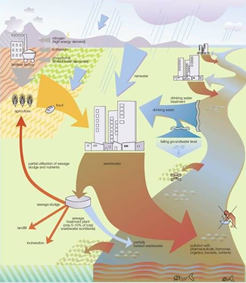 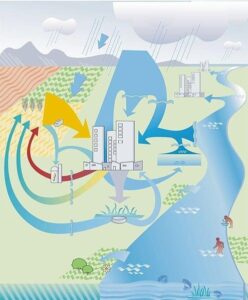 What is a sustainable water and sanitation system?

As previously described, a centralised water and sanitation system treats water in a central location and then distributes it through given networks in a non-circular way. Reportedly, it leads to an overall environmental degradation, unidirectional waste of resources, let alone high maintenance and investments costs. As an alternative to this conventional water management, however, decentralised models have been introduced throughout the years following the 3R Strategy (reduce, reuse, recycle).

Decentralisation in the water sector finds its principles in an integrated and closed-loop approach as shown in figure 3 (Ecosan approaches). This concept implies wastewater separation between high contaminated and less contaminated water. By doing that, the first one can be treated and reused in agriculture and horticulture as fertilizer, while the second one (greywater) can be purified and reused in several ways, in a closing loop of resource-oriented water treatment strategies. In fact, it is aimed at recycling water in a safe way for human health, but also preventing groundwater pollution and reusing nutrients contained in blackwater to minimise the use of artificial fertilisers in agriculture and food production.

Among the methods that are being developed to face water challenges on a global level, decentralisation is increasingly recognised as one of the most sustainable alternatives to the conventional approach.

In general, and as depicted in Figure 4, decentralised treatments can be defined as the practices of placing water treatment and supply close to its point of source. This leads to numerous benefits, such as low impacts of smaller-scale infrastructure in terms of costs and environment; reduction of water consumption in the cycle; self-sufficiency.

From an urban to a household scale: decentralising hand in hand with saving

As previously mentioned, water saving households are the starting basis for a sustainable water use. Some strategic interventions can therefore lead to a reduction of water consumption by approximately ⅓ . From a user perspective, 3 examples are worth to mention:

From a collection and storage perspective, an advanced reduction of drinking water consumption can be achieved by separating the drinking water supply with service water. Service water has a secondary water quality and for this reason it can be provided by rainwater harvesting, greywater or wastewater recycling.

In a constantly growing urban environment, where cities tend to expand at a very fast pace, re-modelling the existing systems according to the needs is the first step towards a sustainable approach. In this framework, the practise of managing water in a decentralized way serves as a sustainable alternative to the traditional centralized systems by reducing their infrastructural impact. Some examples are listed below.

Green roofs:  greening the existing roofs adds catchment surfaces to absorb rainwater and contributes to the reduction of the heat island effect through evapotranspiration, hence improving air quality and the urban micro-climate. A synergic benefit to green roofs can be obtained by combining them with photovoltaic panels. This solution is reported to increase biodiversity due to the presence of both shaded and non shaded areas and to enhance the solar panels performances.

Rainwater retention model and drainage: on an urban scale, depending on the context, one of the focuses of sustainable water management systems is the implementation of the rainwater collection and drainage system. There are several ways to infiltrate rainwater, either nature or technical oriented: infiltration ditches, underground permeable tunnels, geotextile boxes and infiltration wells.  It is always important to remark that a pivotal role is played by the maintenance of water supply systems through leakage and pressure control. Two factors which cause every year consistent water losses (in some urban areas it reaches up to 60% out of the expected 4%).

The WiseWater Microsoft Excel spreadsheet is a tool to helpguide the use of environmentally sound technologies (ESTs) to improve water use efficiency in the urban and domestic sectors. It was developed by the Environmental Management Centre (EMC) for policy makers dealing with water management, politicians, water boards and drinking water company officials, NGOs and local residents. Since the tool is based on Microsoft Excel, it offers a simplified and user friendly way to study EST options and consequences at the domestic level. As illustrated in figure 5, by inserting the base water consumption data per household and information regarding population, areas and rainfall for single and multiple households, users can then easily view the percentage reduction of water consumption possible by applying EST and rainwater harvesting techniques. 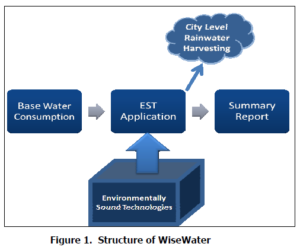 There are many existing strategies to make existing wastewater systems more sustainable, some aimed at reducing the amount of water used, others focusing on water treatment and recycling. These interventions have varying levels of effect depending on context, but the challenge remains; what more urgency does it need to stimulate human behavior to switch to more sustainable water and sanitation systems.