Last year we had the pleasure to spend a few days with Braulio Eduardo Morera, the Director of Strategy Delivery at 100 Resilient Cities (100RC) pioneered by Rockefeller Foundation, and brainstorm a bit with him on how to better design and manage public spaces for enhancing city resilience. This ended up in the elaboration of the Public Open Space Assessment tool (you can read it all about it here). A few things have been changing since our last talk with him. For instance, among others, some news were suddenly announcing the end of the 100 Resilient Cities program!!

So, what better that inviting him to tell us more about their journey in urban resilience, how the program was going to change, and why it is already changing. Or better said: “Where we’ve been, where we are and where we’re going…”. That is how Braulio introduced his seminar, highlighting how and why they recently launched the new “Global Resilient Cities Network” (a program that comes from the legacy of Rockefeller Foundation investment in Resilience). Many people associate Rockefeller Foundation and Resilience with the 100RC program, but he wanted to point out how that type of investment, exploration and support, is something that comes from way before (as you can see in the timeline below), representing an interesting process that deserves further understanding from our side (and that is why we wish to share it here!). 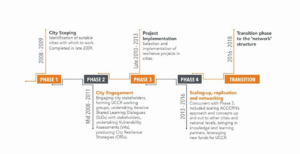 The Rockefeller Foundation’s first investment in resilience can be tracked back to 2004, when the Indian Ocean Tsunami initiated a number of large-scale disasters having a massive impact in the global economy and in the international balance. After that, 2005 Hurricane Kathrina showed that natural hazards could hit and hurt also global north cities, demonstrating how much these are not better equipped nor prepared than others, to withstand and quickly re-organize their services to bounce back to their daily lives. Furthermore, recent disasters hit our global commodity chains, showing how our globally connected markets are highly dependent from many local (not very resilient) nodes, and if one of those is vulnerable and hit the whole chain could collapse – for example, the Bangkok flooding in 2011 had serious repercussions globally, and Toyota cars production plants all around the world had to stop for a couple of days because the second airport Bangkok was flooded and not operational. This pointed out the nexus not only between urban vulnerability and people safety, but also between local and global wellbeing.

The first move taken by the Rockefeller Foundation was to create the Asian Cities Climate Change Resilience Network (ACCCRN), focusing on communities’ recovery and cities re-construction after the tsunami. The objective was trying to engage with 10 cities in South Est Asia, building on their key learnings and community-based initiatives. In that context, they soon realized how, although community resilience was very important, in order to enhance urban resilience, working with municipalities was also key for upscaling community recovery processes. The key goal became to establish bridges between communities and the city practitioners, usually focused on design and command and control practices, while neglecting communities inputs. Key initiatives such as the Changing Course Design Competition for the Lower Mississippi River Delta, reinforced the linkage between both community, science and administrations’ perspectives around the definition of the projects (and this led to a diverse set of investments integrated into the Louisiana plan, not only regarding hard infrastructure solutions, but also mainly about restoring the ecosystems). 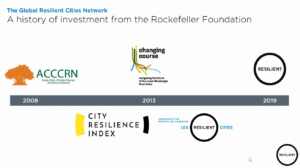 In 2012 Rockefeller approached ARUP, wishing to better articulate resilience, understanding and ‘explaining what matters’, since resilience was (and maybe still is) perceived as a highly complex construct. “Something that somehow you feel, but at the time it was very difficult to measure, so from there the idea to create the City Resilience Index”, as Braulio said, “so that metrics could be identified”. Fourteen initial case studies were developed, examples of failure in cities and their responses, compiling and testing a series of indicators. The result was that both shocks and stresses are relevant, since the combination of sudden disturbances and the action of slower tensions can enable a series of other unexpected processes within the complexity of the urban system (economy, demographic dynamics etc.) In this context you can locate the 100 Resilient Cities program. It shouldn’t be seen in isolation, but as something that builds on lessons from others. 100RC learnt from ACCRN that engaging city leadership was key, while from the Lower Mississippi Delta River process, got that communities are willing to understand the science behind the solutions, and ultimately the City Resilience Index was an important source for a narrative able to articulate what is resilience for a city.

The new program – Global Resilient Cities Network – is basically the continuation of the 100RC experience in supporting cities in building resilience. As introduced far when launching the 100RC, they articulated 4 core objectives and offers to cities: 1) the 100RC would provide funding for the Chief Resilience Officer positions, for 3 years, for someone who would lead the resilience agenda in the City council (and it was key for the city to identify who this person should be); 2) Then the program would support the city to develop a resilience strategy (they would share a methodology based on understanding constraints, opportunities, defining a vision and actions based on that vision); 3) Simultaneously to the 2 first points, 100RC wished to create a platform of partners – NGOs or private sector companies willing to engage with cities, and 4) The last objective was to build a global network, grouping resilience officers, creating a space for them, their leaders and their stakeholders in the city to have access to knowledge and share it (and this is why and where the 100RC program left the ground to the just announced Global City Resilience Network). It does all make sense now, right? 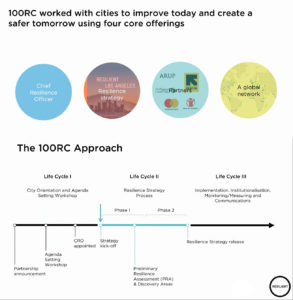 If you look back through this complex process, you realize that once the resilience strategy has been released, the implementation phase is where the real challenges start. Braulio explained how they got to the point where most of the cities already had a strategy, and it became obvious that the purpose of 100RC was somehow being met, but at the same time a transformation was necessary, from inspiring thinking and planning, to taking action. This is how he introduced the Global Resilient Cities Network, a global network of in-city practitioners. After having realized the importance of city resilience officers, it was clear they had to be the leaders of a city to city learning network working for and on resilience implementation. With 96 cities in the network, and 24 city resilience officers, “a new phase has just begun”, he said, and this new phase through the Global Resilient Cities Network counts with 4 key principles (explaining the role of cities and Rockefeller Foundation): 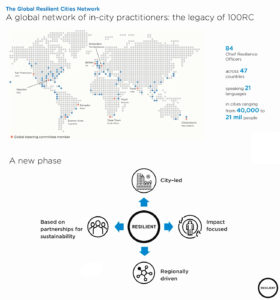 Now it seems clearer that Rockefeller 100 Resilient Cities program did not “closed” or failed, but it was a successful step of a longer-term strategic plan to introduce and support the mainstreaming of resilience in cities. However, many challenges remain now: the framework articulation of resilience is useful and engaging but linking ideas to 52 indicators can be very challenging without the right technical support. Ultimately the program tends to hide low income individuals needs and opinions, so the capacities of those groups tend to be overlooked. From that, the need to better understand power relations as well as informality.

Finally, the Global Resilient Cities Network is thus not a donor, as the 100RC was, but now a new, one more city network, as others (competing and collaborating) networks such as C40, ICLEI etc. Braulio indeed recognized that now more than ever the coordination among organizations and networks is key, and very difficult. Indeed, for many practitioners, all networks look the same, and here stands the issue, that a certain number of stakeholders and funders do not necessarily understand the difference between them in order to prioritize and award funding. The challenge is thus about positioning and coordinating among cities and networks, to identify which is the right way of engaging with whom, establishing how, and to minimize competition while encouraging collaboration and synergies. Braulio concluded that “we need to build partnerships so that our cities can have access to other tools as well. What matters is that those tools are available and useful, and our role is to guide the cities to choose the best tool, related to context-specific needs”.

Thanks Braulio for clarifying roles and tasks of the GRCN. Now it is on us to understand how each network work and how synergies could be enhanced. Stay tuned for more insights.