Urban Climate Change Adaptation & the “Credibility Index”: How to Track our performances

Cities are at the forefront of climate emergency, facing everyday increasing uncertainties respect to climate and environmental conditions threatening people quality of life.  An increasing number of international networks and organisations, such as C40, Compact of Mayors, ICLEI among others, supports mutual learning and networking as explored in a recent study. The climate adaptation financial gap is however huge (billions of dollars currently invested in adaptation versus the needed investments for adapting) and the definition of plans and projects will be often assigned to sub-national authorities, and indeed the responsibility for action on the ground relies directly on them. The urgent need of acting, and planning for climate resilience, is followed by the question about adaptation tracking, asking:  “Are we on the right path, are we doing enough?”

Dr. Marta Olazabal,  is a Senior Research Fellow leading the Adaptation Research group at BC3 (Basque Centre for Climate Change, the leading research institute on climate change in Spain), exploring the impacts of climate change and adaptation options in urban areas. She spent three days with us, discussing her research and trying to unpack the main question about whether cities are properly preparing for Climate Change? 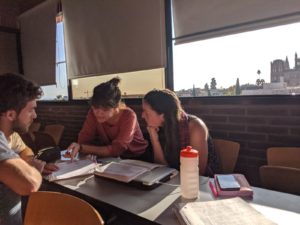 Marta explained how “current efforts to measure the progress of adaptation in cities have focused on documenting plans and policies that deal with adaptation” (e.g. see the recent papers from Reckien et al. 2018, Araos et al. 2016), and how in Europe has been unveiled a general lack of implementation of adaptation plans and policies. This questions if it is correct to consider the mere existence of plans and policies as an indicator of progress. In the light of these evidences, Marta developed with colleagues a “Credibility Index” – trying to assess the quality of these policies and exploring whether these are credible enough, effective and have the conditions to be successful.

But before entering the complexity about how to assess climate plans and policies, lets discuss about how to define and assess adaptation, which is not an easy task. Indeed, as we already have the necessary knowledge and resources to measure mitigation-related performances (lowering GHG’s emissions), we are now facing the challenge of measuring the adaptive capacities, jointly with the reduction of exposures, or sensitivity to treats. The first question to be posed, and that we explored in class was: what do we actually consider as adaptation?

Marta explained to us that then talking about adaptation indicators, you can consider different aspects:

Governance: how governments organise and mobilise?

Outputs: What are governments actually doing?

Outcomes: What is the result of government actions?

The problem with adaptation is that usually you only have information regarding the first two, that refer to the available resources, while it is more difficult to know how to quantify the others, that have to do with the results and reduction of vulnerability. It is essential to highlight that when we look at public policy, we only see the tip of the iceberg: we often leave behind and not consider many other initiatives coming from other actors/stakeholders (community initiatives, private corporate initiatives, not documented in public policy). While these may not be called “adaptation strategies”, they are still working to increase the capacity to adapt (regarding education, social awareness and advocacy, having of course longer-term effects, providing resources, and the capacity to cope with other kinds of stresses). 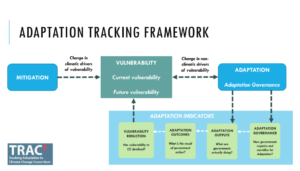 This was the starting point for the study Marta conducted and presenting during her lectures: “A cross-scale worldwide analysis of coastal adaptation planning”, assessing potential effectiveness of local public adaptation policies, with a focus on coastal risks in the largest 136 coastal port cities worldwide, looking at the current state of the art of the adaptation planning, the credibility of the identified policies and the potential to deal with possible risks from extreme events.

The objective of the globally sounding research is to find evidences on the alignment of current actions to future risks. After having presumed that public adaptation policy would be formally documented through risk and vulnerability assessment, future climate change scenarios and adaptation options assessments.

One of the main findings was that, for example, 85% of cities in Africa have no local plan. Marta explained  that “we need to remember that the object here is to be able to measure formal planning and if formal planning means nothing in Africa, you need to acknowledge that there are other kinds of adaptation measures going on”.

One of the criteria used was indeed assessing if the policy was new or revised, and at which territorial scale it refers to (city, metropolitan, regional, state, national). According to government reports:

The interesting result is that actual evidence of implementation was found in only half of the cases.

Ultimately, the alignment with risks was revised with the following results: the 45% are not based on vulnerability or risk assessment; the 85% do not align actions with identified risks; the 80% do not consider socio-economic projections and the 25% do not consider climate scenarios.

All these data draw a very concerning picture of the proposed adaptation path, which in most of that cases is not based on current knowledge on what we may be dealing with.

Is thus current “formal”, “intentional” public adaptation in fact “adaptation”? What you label as adaptation, is it going to be, at the end of the day, adaptation? To what, and respect to what?

More than once, during her class, Marta draw special attention to how we define and understand adaptation is important for the applicability and usability of the outputs of any effort to track adaptation progress in cities and across scales. Which adaptation aspects are worth tracking? And ultimately how to assess the “credibility” of adaptation?

That is what opened the floor to explore the second part of her study: “The Adaptation Policy Credibility Tool” is an ex-post evaluation tool designed to assess the level of progress of climate change adaptation policies: it consists of a checklist covering policy, economic, scientific and legitimacy issues and resources used for adaptation planning. Credibility helps to build trust among funders and investor, Marta explained.

Looking at both metropolitan and local level, the exercise was to assess the whole policy process that has led to the development of this policy documents in 3 areas: policy and economic credibility, scientific and technical credibility, legitimacy.

We can see how the tool allows: comparison and prioritisation, funds allocation, more reliable identification of best practices and while also offering proxy of successful adaptation.

Policy and economic credibility is unpacked into 3 main components, identified with the resources related to budgeting, financing; reliability, to see if resources allocated are coherent with the budget of the whole city; institutional support, taking into account both public and private, and the prioritisation of actions.

Legitimacy has to do with the transparency of the process, of the public information of the outputs, analysing stakeholders engagement, who is engaged, how many perspectives are involved in terms of equity and justice, if vulnerable groups are considered, within the definitions of the actions, scanning all the representatives, advocacy groups that have been participating in the creation of the plan, if there is any indication that they have considered potential negative effects of vulnerable groups of different adaptation measures.

Scientific and technical credibility consider adaptive management and how do they learn from the outputs; monitoring evaluation and reporting, if it has already defined indicators, how do they evaluate, and if it has budget? 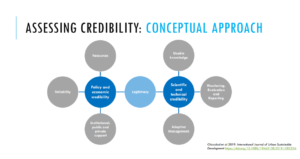 In the last part of the study, as we anticipated at the beginning of this post, the alignment with future risks was analysed. One of the most interesting facts was that the great majority of the adaptation policy documents mention “risk” even if only half of them try to acknowledge a percentage of uncertainties, typical of Climate Change. The discussion in class built up on how we can see that climate projections are reliable up to a certain point. And that is why we should invest not in risk assessment, but rather try to develop a new approach that seeks to increase the capacity to adapt to whatever could happen, considering all the uncertainties. Is there a lack of assessments of the benefits of their actions? For example, an effective way would be to evaluate and consider all the measurable benefits of each option. Even if there is no clear analysis of the specific risks, the alternative is to go and decide for what can assure to maximize the benefits out of each option there is reason to invest in. That would also open the way to make sure communities are effectively engaged: citizens are more likely to take action on climate change, or to support governments decisions, if the wider co-benefits of those actions are emphasised.