Resilience and the future of Oasis: desertification, touristification, Sun from the desert?

This year we had such an incredible group with which we informally decided to celebrate the finish of the classes with a trip together to Morocco. It has now been a week since we are back, enough to reflect on some matters about resilience that we saw during these 9 days in the Moroccan landscapes. The idea of the trip was to explore a complex region, with many contradictions, within an ambitious agenda for climate resilience and mitigation.

We travelled for 3 days from Marrakech to Merzouga (the last village before the Sahara desert). Along the trip we stopped at the Ouzarzate Solar Power Plant – to see NOOR 1, 2, and 3.

NOOR 1, 2 and 3 is the world’s biggest solar power plant. With the use of parabolic troughs and molten salt Thermal Energy Storage it is capable of producing up to 500 Megawatt per year. The three projects cover a vast area of 2,500 hectares (6,178 acres). As we can see in the map below, it is very similar in size to the nearby provincial capital city of Ouarzazate. This centralised plant comes at high cost in terms of water consumption. Its withdrawal from the city’s water reservoir to run its “humid” cooling system and mirrors frequent cleaning its between 2 and 5Mm³/year of water. This contributes thus to stress the water reservoir and putting pressure on the city which is already experiencing shortages in summer and degradation of the water quality in the reservoir. 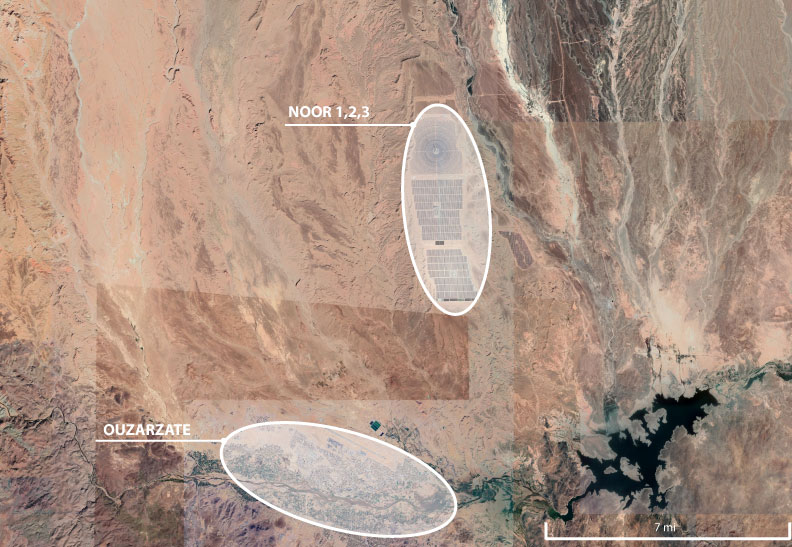 500Km later, we were approaching the desert. Once we arrived, led by our local guides, we visited the irrigation system for the last oasis. Here the villagers of each town cultivate crops for them and for their animals. Despite the scarce rainfall and high evaporation rates, the valley has been recognized for its agricultural richness and fertile soils that nomads used for date production, which they use to exchange with silver and other precious products at the Timbuktu market. Palm trees provided oases with the necessary microclimate for agriculture, while the periodic floods brought essential sediments and nutrients to enhance the soil fertility. The variety of cultivation is various and helps to create the biodiversity needed to contain plagues in absence of pesticides. 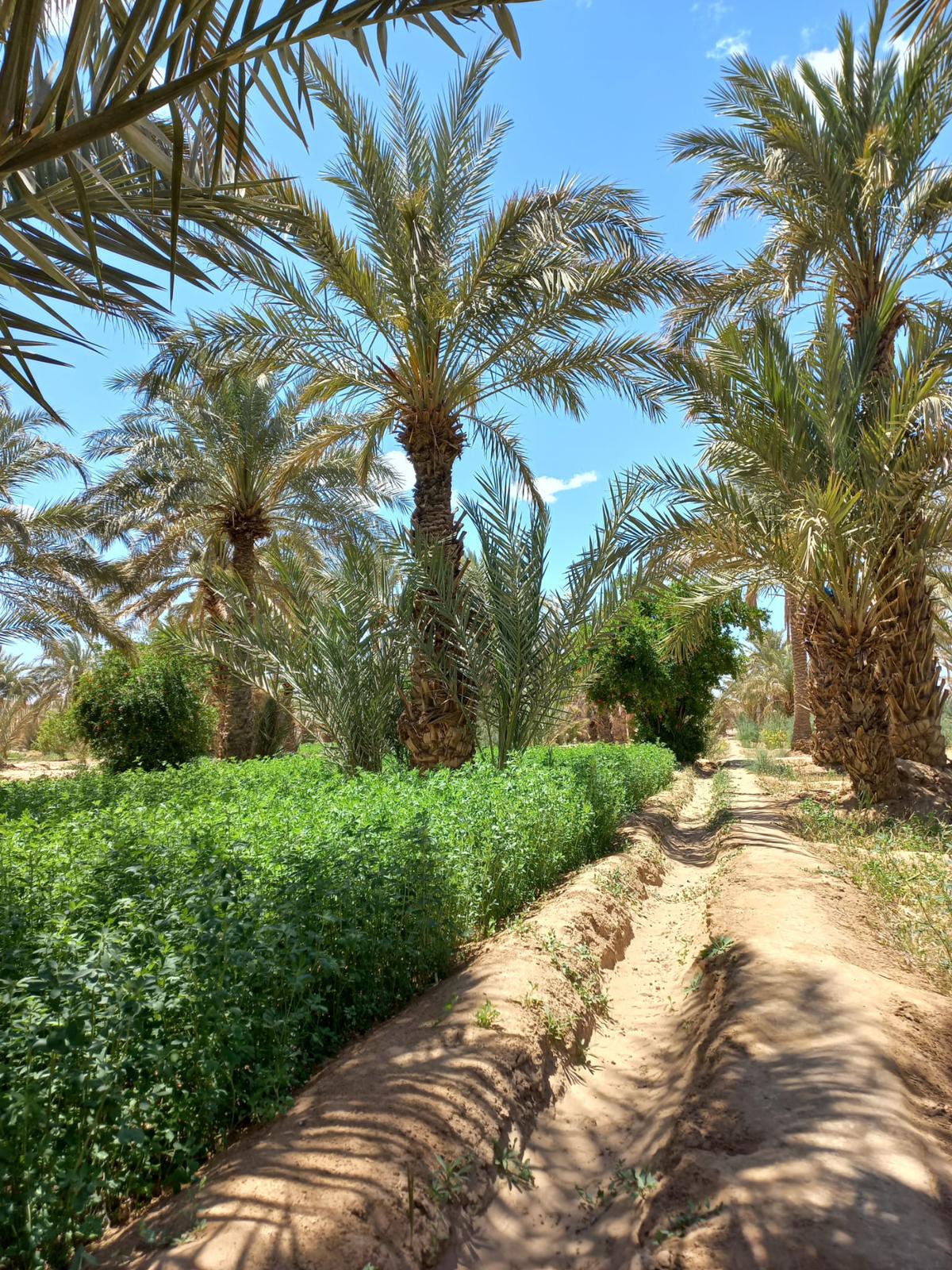 The oasis irrigation system in Merzouga

The water that arrives from the atlas mountain is distributed across these fields by an antique grid of channels. The system is characterised by a straight main channel from which dates palms received water first) that cuts in half the entire oasis and smaller subchannels (for cereals and other crops) parallel to the main one that are connected and open according to the owners water shifts into the smaller ones. This irrigation system however has not been optimised throughout the centuries, and it often leads to a considerable waste of water (lost through the soil infiltration along the muddy open air canals, and evaporation). Each owner is usually allowed to use between 4 and 6 hours a week of this water for irrigation, and these communities demonstrated a mutual and hierarchic approach to common resources management, source of their resilience thanks to a deep environmental knowledge and respect for the environment.

However, today these lands are threatened not only by climate change, that s is leading to an increased desertification of the area (already consisting in a more dry and salty soil, less palms, less water and thus animals), but also from the lifestyle trend of the new generations, wishing to work with tourist and run across the regions rather than settle within an oases living from agriculture. 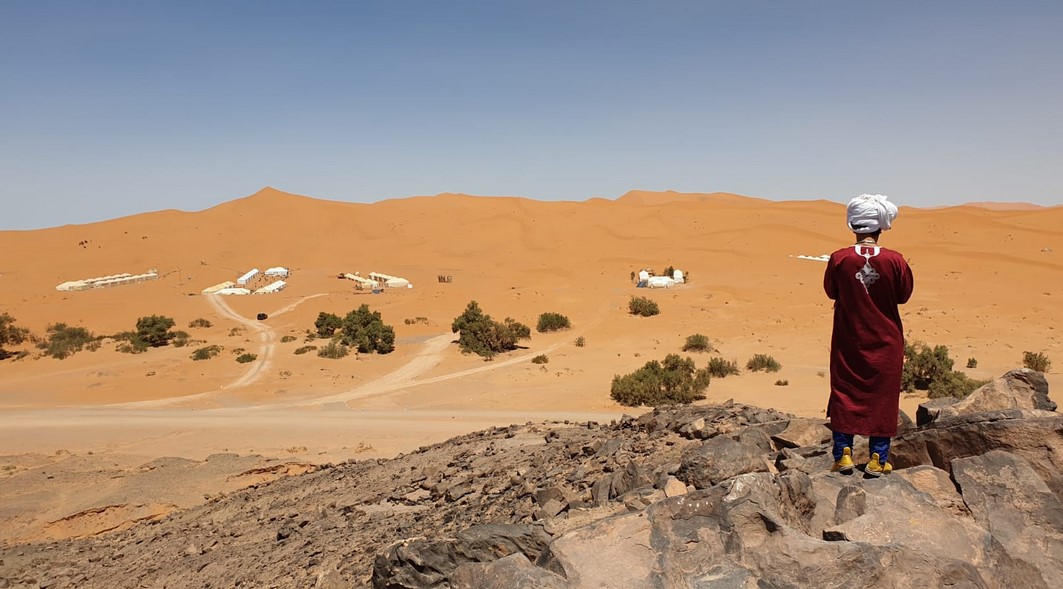 The touristic oasis in the Sahara Desert at 20km from Algeria

During the days in the desert we were hosted in one of these tourist camps  shown in the pictures above. It is incredible how they managed to move cold and hot water, electricity and all sorts of modern equipment for services in the middle of the desert. The landscape thus becomes a showcase that you can admire in total comfort while you are served at a table resting after a long camel trek. The experience is good business for the locals and very popular in the tourist sector. This modern industry is also affecting the way  nomad tribes move and live in the desert, choosing to stop closer to touristic routes (as per the Paris- Dakar route than close to desert oasis). 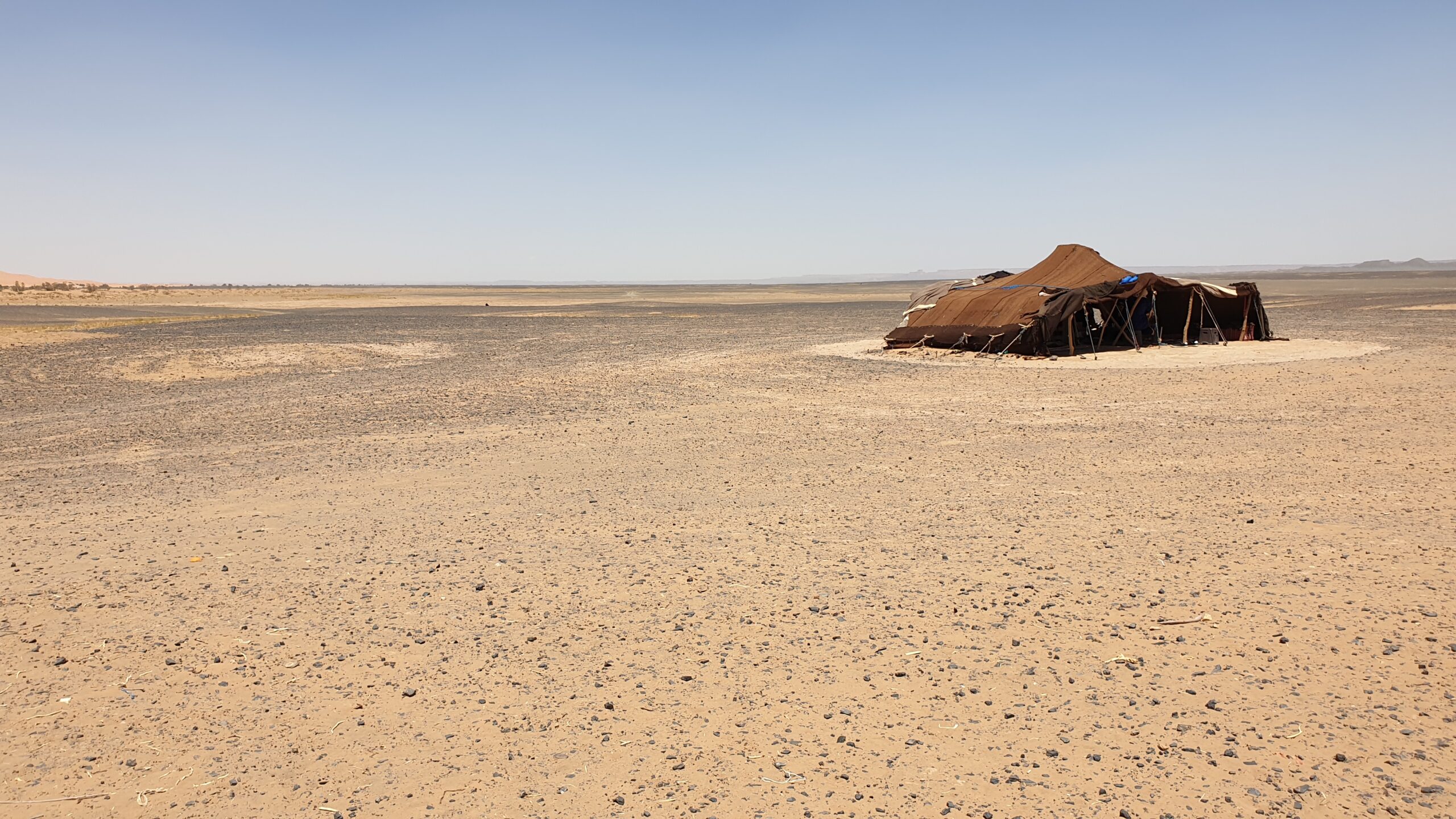 To complete the visit, we experimented with the traditional way of construction. We fabricated adobe bricks and adobe walls using the local techniques (a very tiring activity to carry under the hot sun) hence mostly abandoned recently in favour of other materials. The building environment though consisting of houses, hotels and museums seems though not the main challenge of the area, since the region is showing signs of abandonment or highly purposed for tourism. The question lies then who are we going to build for, and why there. 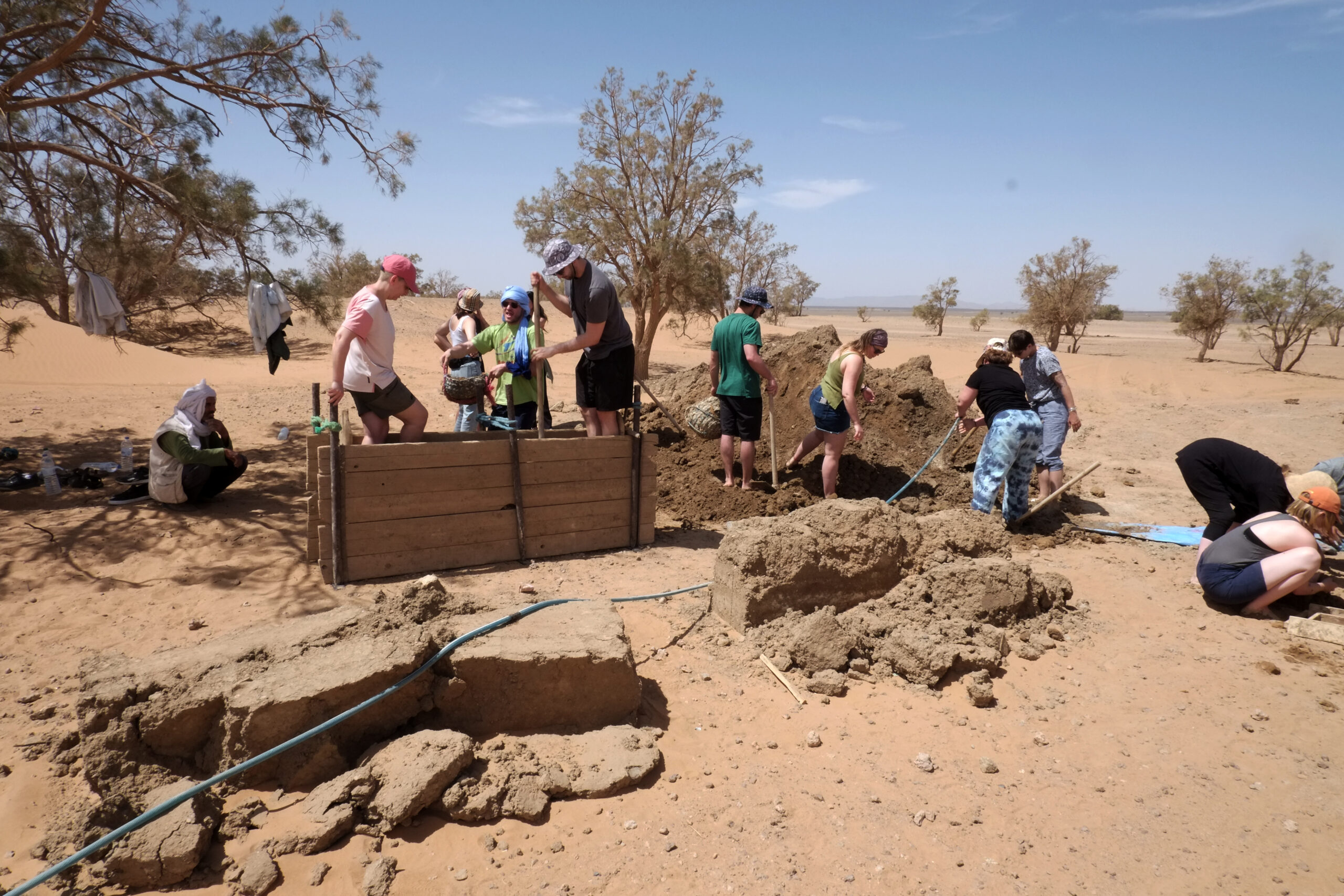 The future of the oasis and ecosystem today seems very fragile, the way their resources are utilised (especially water) are compromising their future, notwithstanding the push for renewables and massive works in these regions for upgrading, enlarging and building safer roads. For centuries nomads and oasis communities have been demonstrating their adaptive capacities and resilience by coping with tough environmental conditions, but this is today threatened not only by climate change, but as well from abandonment of the regions and from over touristification. There is a need for a deeper reflection on the adaptive capacities of people and the government seizing opportunities from renewables and tourism. Similarly to other parts of the globe, threatened by climate and economic changes, which resilience, for whom, and why is key to shape the future patterns of development, and understanding which are the development lock-ins or dependencies we are building for our future. 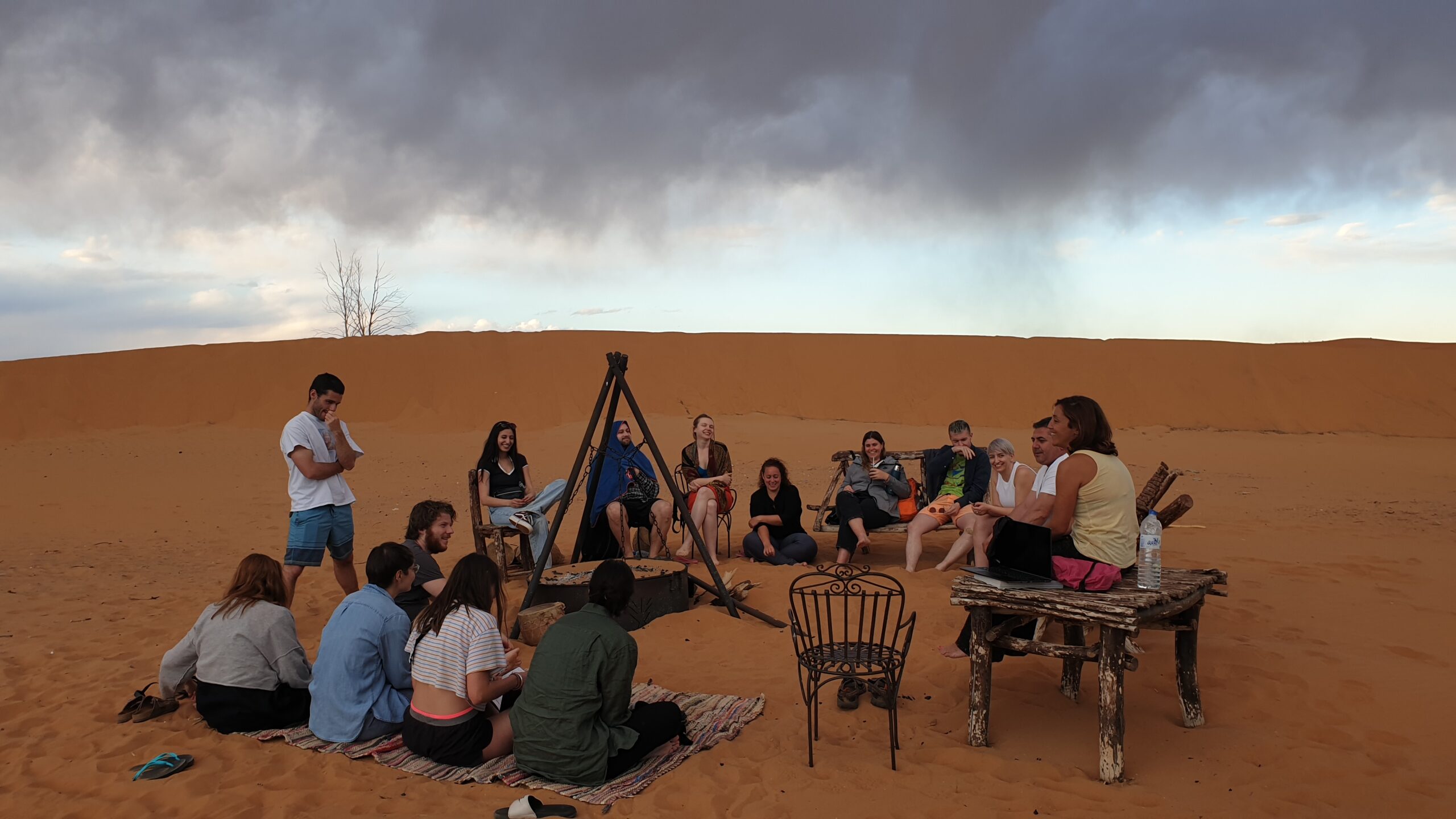