By adminFebruary 28, 2022Learnings
No Comments

Imagine this being the new slogan for a grassroot initiative making various authorities financially aware of how high the risk is for citizens in poorly-managed cities around the globe. In particular, we think of hospitals, insurance companies, and/or pedestrians suing the city for the payment of various bills but we welcome anyone else to take a stab at it. Too often, individuals and other institutions take the blame for what should be considered the fault of city management. There is such limited feedback between how people live and how poorly designed cities can hurt this that we propose lawsuits as a potential response to mismanagement.

We hope in this article to point out how the city in many cases fails to prepare adequately or address basic design flaws that any common person intuitively knows. Although we will be limited in examples and obviously don’t recommend this as official legal advice, we like to point out some common failings. We will even offer some simple solutions in the hopes some city officials will read them. When an accident happens, we need to stop asking what the individual did wrong and instead ask how did the city fail to prepare or address the issue? Honestly, we dream of the day where we start to see legal signs that look more like the one here. 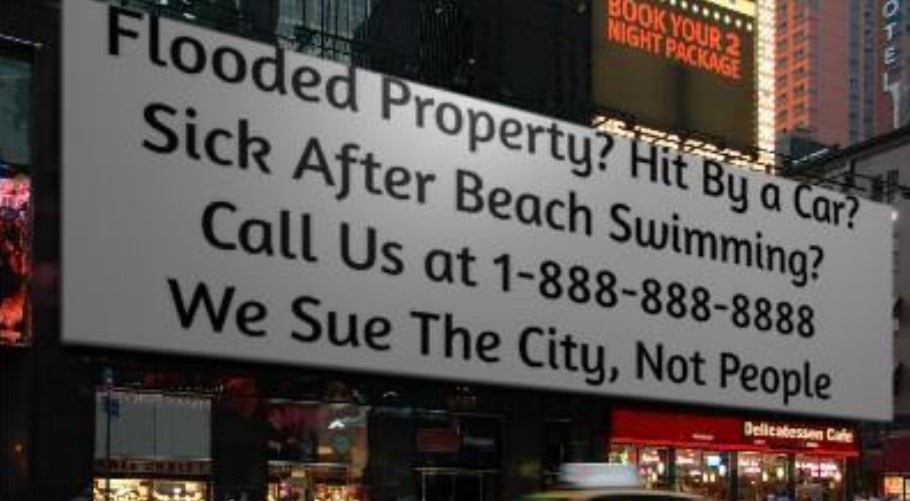 For context, we are students in a City Design and Resilience Masters in Barcelona. Although coming from different parts of the world (Uruguay and the United States), we’ve seen through class how utilizing different frameworks can expose the lack of urban resilience in the cities we live, work, enjoy, & care about. A unifying theme in showing a city’s lack of resilience are unsuitable feedback loops and responsibility assigned to the wrong group(s). A feedback loop refers to those actions that highlight the response, consequences, within a system, back to the driver of change. Many times in cities we see the lack of due diligence and mismanagement implying consequences which are not attended to in terms of responsibilities. As shown in the picture above,  lawsuits could represent a form of reacting to the lack of feedback loops, and thus a call to action and responsibilities.

As a great initial example could be this design choice: a five lane “stroad”  in the heart of a pedestrian heavy, social drinking district in Birmingham (AL) called Avondale. If I have a heatstroke, get hit by a car, or get knocked over by flood waters in any street that looks like this, I look forward to putting this paper into practice. I hope you will do the same whenever a city recklessly allows five lanes, lack of pedestrian protection, & small sidewalks in somewhere hundreds of people attend every weekend to watch concerts, eat food, and drink locally made craft beer.

Pluvial flooding, in short, is simply when water in the existing drainage network of the city is pushed beyond its “breaking point”, not related to an independent water body(river) which typically results in flooded streets, roads, and spill offs. The results can be destructive to property & cars while being deadly for people. This can be quite complicated and nuanced on how much the city is at fault as there are so many different dynamics at play.

Is there a drainage plan building flooding resilience? How much money was allocated for the building of infrastructure? What is the cost/benefit analysis on how much flooding should be prevented in light of the cost needed? Which parts of the city are more prone to flooding than others? How does land use effect all of this? How much does climate change exacerbate historical trends of predictable flood events?

What we can confidently do is blame cities if they do not have a planned strategy against climate vulnerabilities, or at least organized emergency services for rapid responses, or monitoring systems to predict potential impacts or predict extreme events. Below is an example of water overflow in Nashville (TN), although hundreds of other cities could be used as an example, where property was destroyed and people died from arguably a lack of adequate (climate) planning. We can blame cities if scenes like below happen where first responders are not proactively, even in a preventative manner, sent to areas where predictable overflow will happen.

To use a more international example, Montevideo, the capital city of Uruguay, has been renovating its west sewer system for 7 years after obtaining an important loan from the Inter-American Development Bank for $118,000,000, and allocating $20,000,000 of its own budget. This investment in sewer infrastructure had produced the installation of more than 300 kilometers of new pipes in the west zone of Montevideo, the construction of a new water treatment plant, 5 new pumping stations, 5 new storm storage tanks, and the final construction of a new subaquatic spill pipe which will deliver the waste water 2 kilometers away from the coast into the sea in the case of water overflow.

Was this investment enough to reduce the vulnerability of the citizens during a heavy rainfall event?  Notwithstanding the public works, Montevideo is still suffering from flooding in many of its neighborhoods. These floods are so dramatic that they had turned into a political issue during the last political campaign for the 2020 municipal elections. Neighborhoods such as Malvin nuevo, Asturias or Mahoma had been flooded over different years. One flood was so severe in the Aguada district, most of the cars parked around the abandoned central train station got ruined after a rainfall event of 59 millimeters in 30 minutes in 2014. 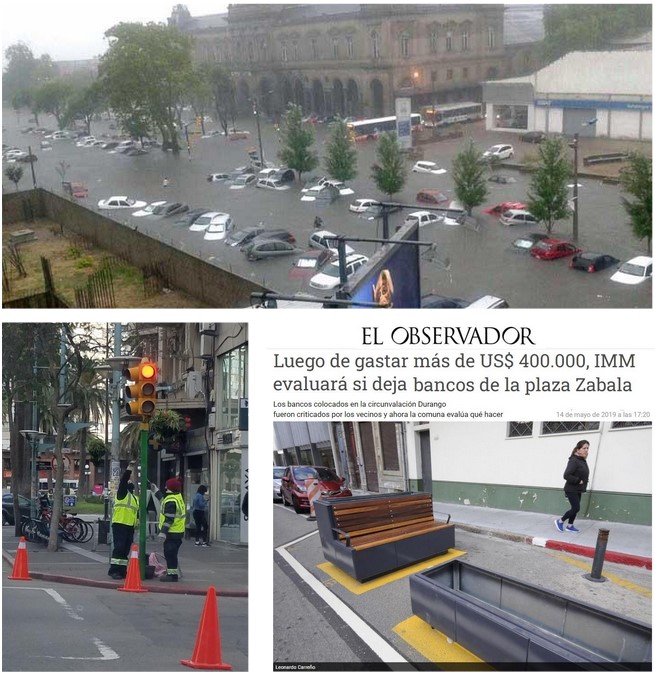 The vulnerability that the Montevideanos are still facing is huge, and no further measures are planned to be taken about the hazards mentioned. Even so, the city’s budget is invested in painting traffic lights green, or paying $430,000 for the installation of 4 bench seats (instead of addressing the long term strategic planning for fixing flooding risks). These kinds of interventions have been labeled as “green-washing” or “safety-washing”. Maybe the city’s occupants have a right to sue the city for negligent spending in light of this widespread destruction of their hard-earned property.

What about preventive measures?

When thinking about the above-mentioned urban vulnerabilities and risk landscape in which we live, many times it sounds as though the institutions have no tools, resources, or willingness to start seriously addressing the root causes of the problems, since these are big in scale (both time and spatial scales). However, while a rethinking and redesign of neighborhoods or cities are a major mission for policy makers and city practitioners, there are a variety of actions, management and design solutions to prevent (or reduce) the impacts of many potential destructive events.

Although this handbook from EPA, about stormwater management in cities, is far more in depth on street trees’ multiple co-benefits, imagine if the streets in Avondale (second picture) looks more like another neighborhood in the same city: ForestPark. If an extreme flooding event were to occur here, the water velocity that could knock over pedestrians and/or cars would be decreased by the trees & hedges. The overall flood depth and flooding overflow would be less as trees absorb & retain the water while on sunny days, pedestrians experience the cooling effects of trees. Cars also go at a far slower speed as the street is designed for the pedestrians that inhabit the place. If any accidents were to happen in this space, it would seem next to impossible to blame the city at least for the design-choices made in this picture.

Other preventive measures could be simple cost-effective ways to inform citizens of the limits of a local government’s infrastructures. Waving red flags at a beach whenever e coli reach past a certain hazard level during a spill off is progress. It is recognition that the existing infrastructure couldn’t fully contain the waste water present but the government wants to be proactive in limiting its negative effects on the citizens. Another great example is knowing where water overflowing on streets and highways is going to occur and ensuring that first responders are there to prevent cars from attempting to cross before people lose their lives.

If these preventive and impact reduction mechanisms mentioned above are available, why do we suggest suing the city? We merely suggest it as a potential example to create better feedback loops. We want a society where people look at the built environment and circumstances first before blaming the individual when a hazardous event happens. That said, we would be remiss if we didn’t mention that there are plenty of other ways for citizens to help provide this feedback: through peaceful protests, running for office, showing up at council meetings, & even writing somewhat controversial blog posts. However, we mention this method because so often, these existing tactics seem to not create urgency or concern for local government officials. We also discuss this because so often lawsuits are targeted at blaming people instead of city infrastructure that encourages certain behaviors & negative outcomes. Although initially lawsuits seem reactive, imagine a world where local governments are concerned about the financial & human risk of problematic infrastructure & responses. Imagine a place where the human and financial cost of not taking action is far more expensive than the cost of taking action. Imagine a world in which the reports about the costs about climate inaction would not be ignored and considered scientists cautionary messages, but a toll to really pay.