Power Systems Resiliency: How can we avoid a blackout and the consequences from it?

By adminDecember 2, 2022Learnings, News
No Comments

Black Out of New York in 2003, Source: https://www.tribpub.com/gdpr/nydailynews.com/

Power Systems Resiliency: How can we avoid a blackout and the consequences from it?

How can we prevent power outages such as the one in New York in 1977, New Zealand in 1998 or Barcelona in 2007 from happening again? Have you ever thought about what would be the cascading effects if this type of event occurred in your city? These are questions we would like to share here, since addressed during the course on Power Systems Resiliency at our Master in City Resilience Design & Management.

Dr. Jose Luis Dominguez Garcia, Head of Power Systems Group at IREC (Catalonia Institute for Energy Research, an international research institute) and Albert Gili (Research Engineer in the same unit) were here with us to explain how they work on energy infrastructure resilience.

What is a power system and to what extent is it vulnerable?

The power system means everything that has a direct or indirect impact on the electrical field. It includes communications, power electronics & renewable energy, electrical network and energy storage. It also involves a channel of systems, all supplying power from a station to a number of energy users. It is generally composed of several elements, as described in the figure 2 which represents a classic organization of a power system as we know in Europe. The more components and longer the power chain, the more vulnerable it is. However, vulnerable to what exactly? 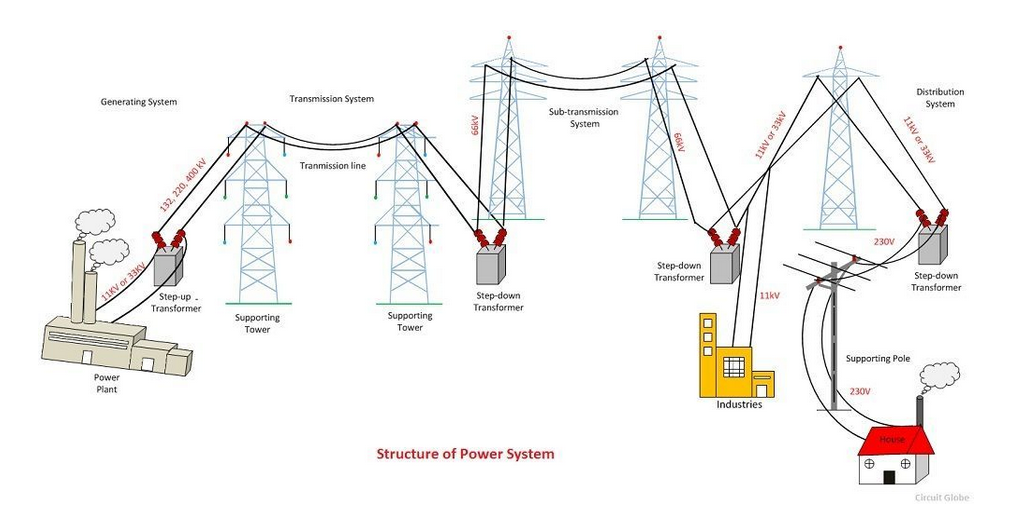 Jose and Albert introduced during the class three types of events that may influence the power system. First, cyberattacks that can take place in smart grid and are known as false data injection and denial-of-service. Those cyber-sabotage cases may cause disruptions in the power system and even blackout. It is even more relevant as cities are becoming more and more complex, this threat has to be taken into account.

Second, sudden changes in the patterns of consumption as experienced during the COVID-19 crisis that obliged power companies to adjust the structure of the production meanwhile ensuring the stability and reliability of the power grid.

Last and most explored, extreme weather events that may cause huge impact on the power infrastructures. Two cases have to be considered, weather-related extreme events that are often short-lived (hurricanes, droughts, heatwaves) and climate-related extreme events that are persisting through the time (probability of occurrence of weather-related events). As the climate change is worsening its impacts, power systems will be confronted with more of the extreme weather events which can lead to significant cascading effects if the city is not well-prepared.

Damage caused by the typhon Rai in the Philippines, 2021, Source: https://www.europe1.fr/international/philippines-le-typhon-rai-fait-375-morts-un-ravitaillement-durgence-necessaire-4083755

How to understand cascading effects and how to prevent them?

Critical infrastructure is a body of systems, networks and assets that are essential to cities to continue their operations. There are ten of them, including power systems, food and water production, banking, transport or health. Many critical infrastructures and services are dependent on the power system which enables all technology used by organizations and individuals to function within a society. Life without them would be unrecognizable in comparison to the life many of us lead today (East Coast, 2012). Their dependence on the power system is making our societies vulnerable and less resilient, since in case of a blackouts, we won’t be able to have access to fresh water as the pumps won’t function anymore. And it is not only about water. The food supply will also be disrupted (as we need electricity for the logistics), the storage and shops, hospitals may be impacted if they do not have a backup system and so on. The many consequences from a blackout are huge and the above mentioned impacts are known as “cascade, or domino effect”. In order to prevent them, we need to understand how to assess these infrastructures dependencies, and plan and manage these dependency chains in a smart and adaptive way.

During these classes we defined resilience as “the capability of overcoming critical moments and being capable of adapting after the occurrence of an unexpected situation.” Jose and Albert also explained the difference between resilience and reliability of the power system as explained in figure 4. Indeed, contrary to other disciplines addressing resilience, and defining it as the adaptive capacities, those engineers distinguished reliability (meaning the ability to operate/work without failures in high probability, but low magnitude events) from resilience (referring to the ability to survive and recover from low probability, but high magnitude events). Thus, for example, the IREC aims to include not adaptativity or reliability, but “resilience thinking” through its power systems by anticipating extreme events. 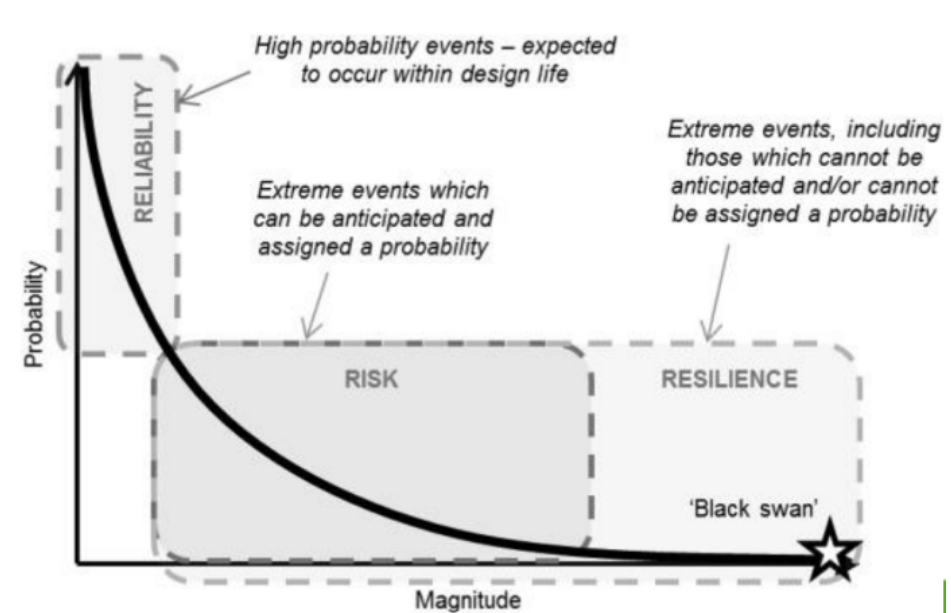 How can we implement resilience thinking within the power systems?

IREC is addressing this goal in Barcelona through 3 stages: Planning, Response and Resilience. Let’s go through them as they are working on it.

The planning stage is characterized by a risk assessment tool for climate and weather events such as shown in Figure 5. On this map, medium (yellow dots) and high (red dots) voltage substations, components that transform voltage from high to low or the reverse, are represented as well as flood scenarios ranging from the least extreme (T1 in dark blue) to the most extreme (T500 in white blue). In this way, the municipality is able to have an overview and can prioritize its actions in order to make substations less vulnerable to flooding. This method can be adapted to any kind of event. Non-geolocated tools analysis such as PSS or geolocated analysis such as ArcQGIS or QGIS may be used. 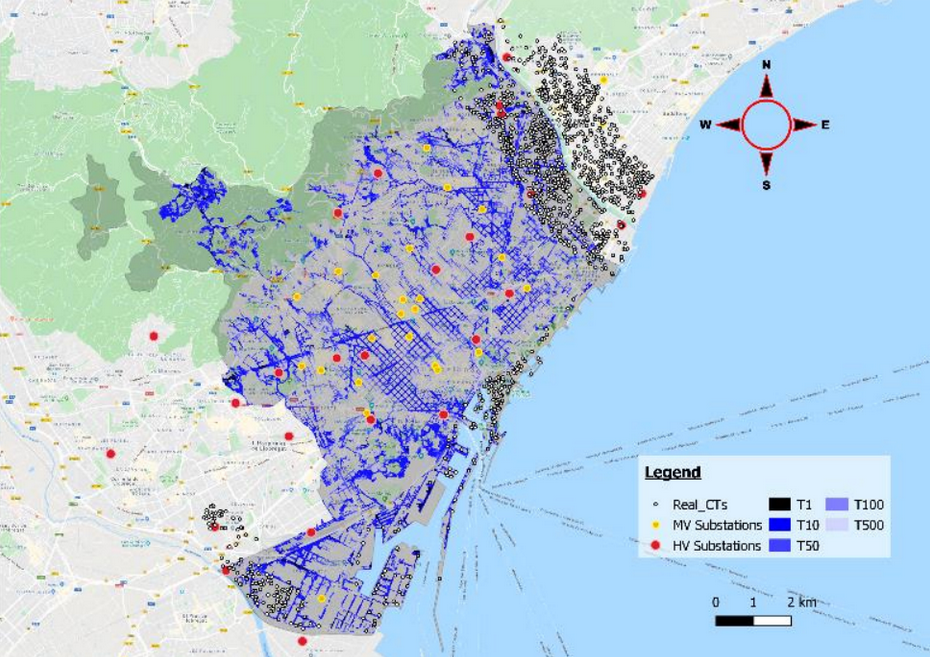 During the course we experienced mapping tools through QGIS as illustrated in Figure 6 & 7. We managed to map the substations of Catalonia in purple and the transformers in blue. We also classified the power lines in three categories: high (red), medium (orange) and low (green) voltage (Figure 6). We then combined these data with the flooding scenarios of the Llobregat River and identified the vulnerable components of the power system, as shown in Figure 7. The data of transmission lines was gathered through the Open-street-map online tool and incorporated into QGIS. Through this method, it was possible to highlight the areas of vulnerability within the power system. The data of this power system is essential as we can monitor and prevent it’s limitations, make it more resilient. 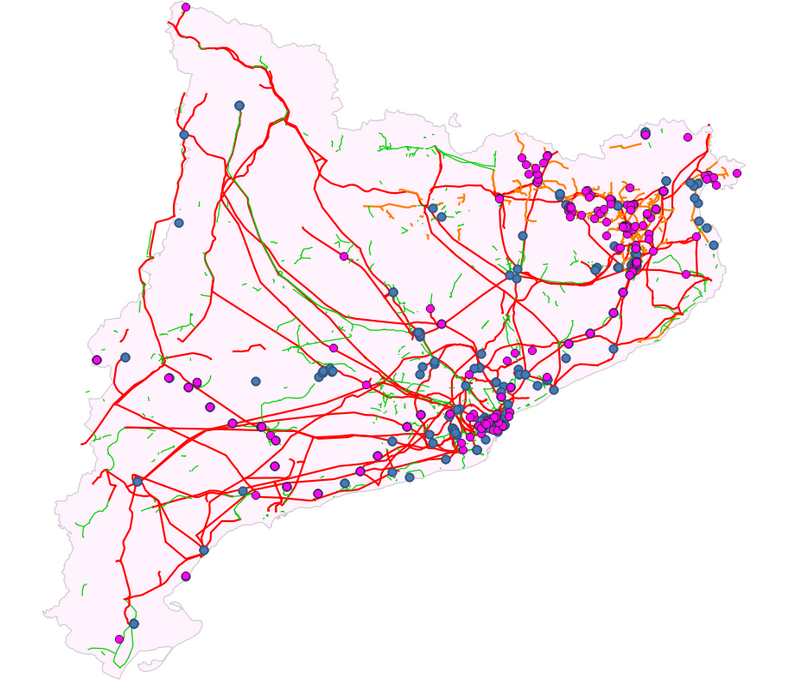 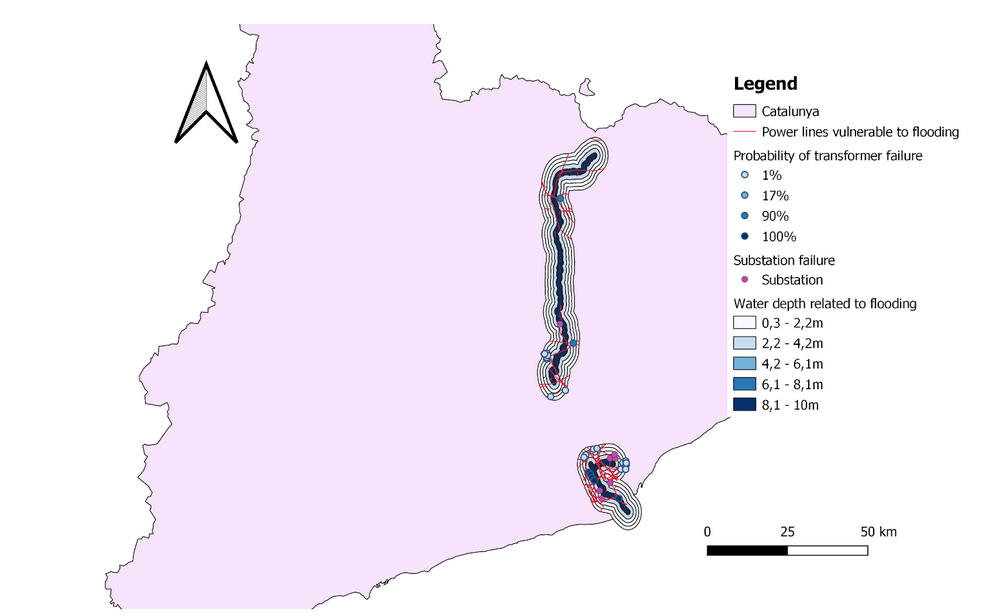 Vulnerable components of the Catalan power system according to flooding scenarios of the river Llobregat, Source: Authors

Mitigation and response actions constitute the second phase. As highlighted earlier the demand of electricity will continue to grow, some resilient strategies are for power systems to be operated through smart grid technologies, well distributed energy resources (solar & wind energy) or to have transportable energy storage systems to mitigate large areas in case of black outs. To further improve resilience includes integration of disruptive events into planning decisions.

Examples such as Near Zero Energy Buildings(NZEB), a building that covers the needs necessary for its consumption, or at a broader scale the Positive Energy Communities(PEB), may be exploited and helping to reduce the “Non-Supplied” citizens in case of black-out or extreme event. Those examples may lead to energy independence, by decentralizing the power system through the exploitation of island microgrids or buildings (Figure 8). This resulted in a reduction of power components and a shorter power chain. By limiting cascading effects, the power system becomes more resilient.

Improving the power system’s resilience to weather extremes and more chronic impacts of climate change requires investment. However, the reality is that budgets for those adaptation and mitigation investments are limited and must be targeted in ways that deliver the biggest and most equitable benefits to both the power system and society.

The adaptation stage consists in the combination of the two previous stages in order to prioritize areas that are the most vulnerable to power outage. Figure 9 is showing an example of what looks like an adaptive measure in Barcelona, by identifying infrastructures more likely to fail and areas in which mitigation measures may be implemented, it is possible to create a “power plan” for the short, medium and long term. 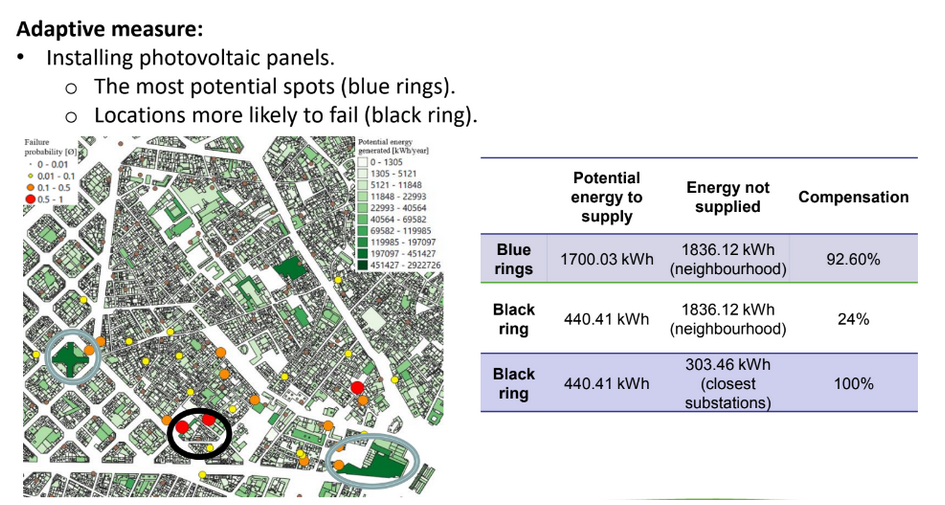 This post introduced the power system components and how a disruption or in the worst case a blackout may impact critical infrastructures and destabilize our lifestyle. However, there exist multiple solutions to make power systems more resilient. The IREC proposed one by designing resilience scenarios that can be applied in many cities in order to limit the cascading impacts. What we can learn from this, by identifying the elements of the power system more likely to be affected by an event, it is possible to define an action plan prioritizing the measures to be implemented in the short, medium and long term according to the budget allocated by the city.

In addition, historically cities have designed their electrical systems in a centralized way which makes them vulnerable to extreme events. It seems necessary in the future to decentralize them. Thanks to projects such as NZEB (Near Zero Energy Buildings) or PEB (Positive Energy Communities) that, even during a general blackout, allow buildings, districts or even critical infrastructures to continue their function.