Overcoming Recovery in Infrastructure Resilience: an interview with Daniel Eisenberg

Critical infrastructures act as the lifeblood for cities, and providing crucial services for them to function, ensuring they remain operational is imperative for urban resilience, to create the foundations on which to build a sustainable and equitable society. Infrastructure enables capabilities, yet these are interdependent on network flows. For example, if the power goes out during a storm surge, flood gates or storage takes may become defunct. Transversely if a power station is compromised by floodwater, as we saw in the Hwange power station floods in Zimbabwe this year, the cascading impacts can be vast.

As cities grow and evolve into ever complex interconnected systems – due to technological advancements (and more presently, changes in the types of infrastructure we consider critical i.e. a smart highways/motorways) they have become centralized in control, yet interdependent. However, as Susan Clarke and colleagues have found, interdependent systems, prioritizing criticality around human need becomes fraught with convolution, as such considerations need to be made around mapping and modelling the cascading impacts and scales of disruption that could occur because of these interdependencies. 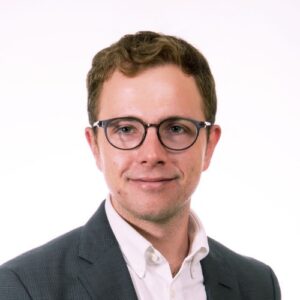 But how do we do it? How is that done? How well do we understand system interconnectedness?

Who better than Daniel Eisenberg, Deputy Director for the NPS Center for Infrastructure Defense, to discuss with us the interactions of infrastructure networks and their modelling?

A young but broadly experienced professional, Daniel’s research focuses on the design, operation, and adaptation of resilient infrastructure systems with emphasis on applying resilience engineering theory to improve system design and emergency operations.

What are the gaps between expert knowledge, research, and implementation of critical infrastructure resilience in cities?

“A lot of definitions of resilience have these nice curves about recovery, fitting in a lot of people’s views. Like disaster management: resilience has a failure stage, like a hurricane coming through, and destroying everything. Then there has a recovery stage – we’re getting the system back up online. And then once we have all the power grid back up and working, we’ll ask what we can do to try and make it better. That’s how the Federal Emergency Management Agency in the USA makes decisions and has been operating, encouraging people to start focusing on the recovery side. It’s helpful, but in practice, it’s not making things necessarily more resilient, in the longer term, right?

This simpler view does not consider the relationships of complex systems and the real context implications of how systems change over time. The important thing to recognize is that, from a resilience perspective, we want better sensing, anticipating, adapting through learning so that systems can evolve and change. This is what the theory and research tells us. Unfortunately, one of the gaps between theory and implementation is around data availability and interpretation to compile information, and thus take action. Indeed, often data doesn’t equal information.

Creating that data stream (even with huge datasets) only has any value when it is utilized for framing the necessary information. My main concern is that people seem to be thinking about practical problems incorrectly, through the wrong lens; it is a growing focus on moving into this distributed, data-control-driven, artificial intelligence mode of analytics that could be dangerous, if we don’t recognize, when applying the data the new vulnerabilities we’re putting in.

Case in point; hacking within transport systems. We develop systems that will be collecting information and automatically changing functions of the system faster than we can respond. The goal is that our city will run on autopilot – without any human intervention. But the whole reason for having a pilot sitting in the pilot seat of a plane is because not all situations have been thought of before. Automated systems may be really good for expected, day-to-day municipal operation, but what about when there’s some kind of transient event that’s never been experienced before? In that scenario, you’d really hope that there’s someone there who can maneuver the decision-making levers. 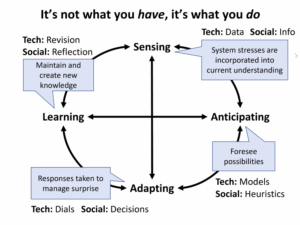 The big issue is that we need to adapt more organically to an increasing degree of uncertainty which can sometimes lead to illusory and false tradeoffs. One of the key propositions to address this is through polycentric governance – within Urban interdependent systems (UIS). This should be able to engage transversal participation engagement down to citizen level, leading to co-benefits, generating useful information fitting for each node. This approach bridge research and practices, allowing governance to take a step back  from just recovery and efficiency, and see where data can better inform decision making, gauging perspectives on how to move toward more integrated and decentralized UIS with one another, thus following a semilattice structure (calling on the ideas of Sybil Derrible’s article Urban infrastructure is not a tree, opposing the conventional siloed ‘tree’ like approach of the late 20th century).” 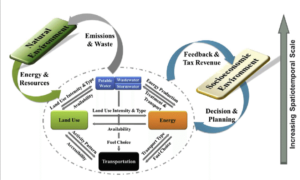 Interconnectedness within the urban infrastructure system (UIS) and the interrelation of UIS with natural environmental systems and socio-economic systems. (Pandit et al., 2017)

Are contemporary/ongoing/current assessments and tools for managing infrastructure vulnerability and resilience accessible and effective for use by cities practitioners?

“Yes, there are lots of methods for assessing infrastructure function dependencies nowadays, from both the social and technological side. With available tools however, there can be either too much depth, or too little. The interpretation and results of some tools for assessing network structures and operations are too high level to be appropriate for making real helpful decisions and recommendations. There are tools that are technically detailed and useful for getting contextual and social information, but generally too messy and too difficult to be applied in a generic way.

Usually, this kind of information is not presented with enough clarity to use it, and only understood by technical experts when available. I would say it’s not that effective tools are difficult to apply, or that they don’t exist, or that they couldn’t be made – it’s that the things that stick with decision makers, when taking a cross sectoral or interdisciplinary approach, are generally the watered-down versions that are easier to use. These are typically Excel spreadsheets with green, yellow and red cells. This is where I see the challenges.

It’s easy to think about assets in isolation, whereas it’s hard to think about the system-level asset portfolio. Ideally, these tools would make sense to everyone and people get it, in terms of the output. But in actual applications, we all tend to revert back to “let’s do the thing that is easiest to make decisions about, let’s do the thing that’s easiest to understand”, where reality is too messy.”

Which are the main implementation challenges, working across administrative borders?

“The main challenge for infrastructure (and its governance) relate to the “theory for common-pool resource” issues. To implement effective governance there should be an agreed regulation and enforcement to exist among actors. It’s of course easier, let’s say, in the United States, or maybe in the EU, where you have a governing body that is cross-state or cross-country borders, that is agreed upon, that can go in and establish this regulation. When it comes to something like an international pipeline across the Canada and US border, the regulatory and management system in charge of insurance has to be at the coordination scale of that cross-border pipeline.

In certain systems, we see this pretty effective. For example, for electric power systems in North America there’s NERC (North American Electric Reliability Corporation), they actually set reliability standards that are approved by Canada and Mexico. Thus, each country adheres to this higher-level organization, their recommendations and supplies it with regulatory compliance within their own country borders.

It certainly becomes more difficult when you have very little coordination, and very little regulatory collaboration across borders, like in regions where there’s active conflict. For example, in the Azerbaijan and Armenia case, they’re having trouble trying to separate their country’s social and political conflict from the pipeline systems that connect across the borders all the way to Georgia and Turkey. The regulatory and compliance structures for organizations who are managing these systems have to be in line and have to be at the scale of the infrastructure itself. 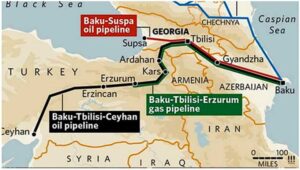 Oil and Gas piplines in The Caucasus (Source: Modern diplomacy)

Governments want multinational corporations to provide diversity and come in and fix our problems when there’s a big disaster or a significant shock to infrastructure. It’s like we’re moving more into this corporatized neoliberal multinational corporations being our protectors versus governments themselves. And, you know, there’s a benefit to that, potentially, but it can’t be the only solution.”

Overcoming recovery: which you think are the most promising mechanisms in building resilience for boosting a transition toward sustainability?

“When I think about resilience, I’m largely focusing on some adverse event response and management. And when I think of sustainability, I’m largely thinking about the long-term goals and paths that we hope that our city country globe goes to, to live within our carrying capacity and our constraints that are set by the earth. We want systems that can survive the threats that we’re experiencing, we need a consensus around shared principles to shape the mechanisms that drive the long-term broader vision that makes shift things to be more sustainable over time. I would think probably the most important thing would be trying to couple those two, to be more effective in practice.

Similar to us in the USA, all countries agree on a couple of key standards that we’re going to set up our infrastructure systems to live by. We can tweak these constraints that allow us to adapt more effectively. We must see that a lot of opportunities show up when a disaster hits, and be ready to use them.

I think we need to be harnessing the failures that we’re experiencing more dramatically, to be able to build, not merely mitigating for future threats, but actually opening to transition our systems when given the chance. So rather than live in a world where we assume that we have infinite resources, let’s assume that we only have very few opportunities where you’re going to be offered these resources as our default setting.”

In the midst of emerging from an unprecedented pandemic, cities are already compiling policies to drive resolutions to the most urgent issues that prevent the realization of the Sustainable Development Goals (SDGs). Daniel expresses concerns about the prevailing practices in infrastructure resilience focusing on recovery, rather than evolution, meaning there is a lack of critical thinking about systems’ evolution, when thinking about resilience in a systematic way. Moving away from recovery would mean a paradigm shift toward the analysis of harm from a much wider lens, and harnessing critical infrastructure failures more dynamically to transition our systems toward reducing dependency on fossil fuels when disasters happen. No shift of this caliber will be possible without challenging the idea that resilience must always be defined as bouncing back to the infrastructures, technologies and services we were using before a crisis strikes (or several crises all at once).

Thanks for your time Daniel.

For who might be interested in further insights on Daniel work, here some links to thoughtful resources on this topic: