Nature based solutions are playing a huge part in Barcelona’s resiliency – Here’s how!

Dense cities like Barcelona are facing an increasingly diverse range of urban challenges. From climate change-related threats such as flooding, rising sea-levels and extreme temperatures exacerbated by the urban heat island effect, to socio-economic issues of inequality, air pollution and food security. With respect to these challenges, urban areas have always been reliant on the provisioning, regulating and cultural services that ecosystems provide as a source of resilience. This is why recently, an increasing focus has been placed on the importance of ecosystem services (ES) to support urban resilience, through services such as water flow regulation and run-off mitigation, climate regulation, air purification and waste treatment. Nature-based solutions (NbS) represent an umbrella concept for ecosystem-related approaches offering a widely applicable, economically viable and effective method of building resilience to multiple urban challenges. Their success is also based on their capacity to provide multiple benefits at once (co-benefits), addressing both socio-ecological and economic domains.

In 2013, Barcelona published its Green Infrastructure and Biodiversity Plan, leading the trend of a new type of climate planning: green climate resilience. The plan set out the challenges, goals and commitments for the city in preserving green infrastructure and biodiversity, maximising the expected benefits from the provisioning, regulating and cultural services that its ecosystems could provide. During our module on NbS, led by Dr. Johannes Langemeyer, we had the opportunity to explore this topic in more depth, providing us with a critical understanding of the challenges around implementing NbS in urban contexts. In this blog post, we’ll examine the three main ways  that Barcelona is implementing NbS as a tool for climate adaptation and mitigation, sustainable urbanism, social wellbeing and at the same time contributing to achieve the Sustainable Development Goals. 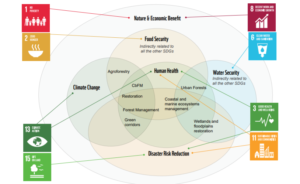 It is widely acknowledged that NbS are an effective means of climate change mitigation and adaptation. Green and blue spaces in urban areas such as city parks or green facades help mitigate the urban heat island effect, reducing air temperature whilst simultaneously improving air quality. Whilst both the adaptation and mitigation agendas seek to make us more resilient to climate change, they do not always align. Some adaptation measures, such as air-conditioning or desalination, are implemented at the expense of mitigation efforts. NbS and GI can create synergies and co-benefits, helping to align adaptation and mitigation, and avoid the trade-offs and conflicts that can occur between the different agendas.

NbS such as rain gardens or bioswales mitigate local flooding from extreme rainfall and alleviate the pressure on traditional urban drainage systems whilst improving water quality and supporting biodiversity. In Barcelona, green spaces such as Parc de Joan Raventos have been developed with water sustainability in mind. Through an innovative drainage system, rainwater is collected across the site, and filtered to purify it before it reaches the subsoil. In the event of extreme rainfall, water is kept in the retention area to mitigate flooding. 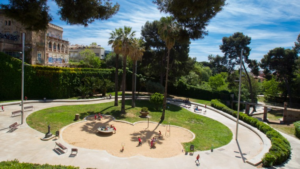 NbS for regeneration and sustainable urbanism

NbS are often associated with sustainable urban development, as their simultaneous provision of social, environmental and economic co-benefits makes them a strong investment opportunity for sustainable urban planning – contributing to increased amenity and property values and reducing noise and air pollution.  As well as the Green Infrastructure and Biodiversity Plan, Barcelona’s department for Ecology, Urban Planning, Infrastructures and Mobility has focused on improving the ecological values of the city through many other urban greenery and biodiversity initiatives. One of the key types of GI that the plan focuses on is green corridors. Running parallel along roads, these strips have a high presence of vegetation, and are used to separate pedestrians and bicycles from heavy traffic. These corridors cross the urban fabric of the city, ensuring connectivity between the various green spots within the city

In 2015, Passeig de Sant Joan was redeveloped into one of the first green corridors in Barcelona, with the aim of supporting the ecological and social connectivity within the city. The 1.2km green promenade connects the district of Gracia with Park Ciutadella, distributing space between wide pedestrianised areas, two car lanes and a bidirectional cycle lane. The redevelopment has improved the connectivity and functionality of the area, and added significant social and environmental benefits.

NbS for well being and social cohesion

Multiple social co-benefits also occur as a result of access and availability to urban green space. These include providing benefits to human physical and mental health, offering educational services, and supporting social cohesion by creating a sense of place. Barcelona is a city that struggles with urban segregation, social exclusion and inequalities. In the city’s Strategy for Inclusion and Reducing Social Inequality, ‘improving urban spaces, greenery and biodiversity’ is outlined as a necessary action to reduce territorial social inequalities. The Green Infrastructure and Biodiversity Plan also identifies the positive effect that NbS can have on wellbeing and quality of life, promoting programmes to transform parks and gardens into recreational spaces to improve wellbeing and social cohesion.

As Covid-19 vaccines programmes begin and the world asks how we can provide safer, socially beneficial environments in our cities, national, regional and urban policy is gearing up to respond to challenges and stresses that have become more exposed during the pandemic. They have a window to capture the low traffic, low consumption quiet of lockdowns and confinements, to create policies and actions that align NbS; supporting nature, generating employment and increasing resilience. As Stephan Barthel et al. discuss in their recently published paper, Urban nature as a source of resilience during social distancing amidst the coronavirus pandemic, the importance of nature during the pandemic demonstrates that the greening of cities is not just an opportunity to redistribute urban space away from vehicles, but is in fact addressing a need for more intense contact with nature in cities.

Barcelona has used the pandemic as a catalyst for continued improvement of its green infrastructure, accelerating the release of its ambitious 10-year plan to turn the entirety of the Eixample district into one big superblock.The area will become greener, pedestrian-friendly and almost entirely car-free, with a network of 21 green hubs and 21 neighbourhood squares, and the aim of making one out of every three streets a green hub. Improving walkability, quality of life and health of its residents and supporting the biodiversity of its plant and insect species. Take a look at the winning schemes for the green transformation here.

Whilst we appear to be nearing the end of the COVID-19 pandemic, the importance of green space in cities has never been more notable. NbS provide the social, cultural and economic co-benefits we need, whilst supporting the climate agenda and enhancing the natural environment of cities.