How to Increase and Measure the Urban Trees’ Ecosystem Services? 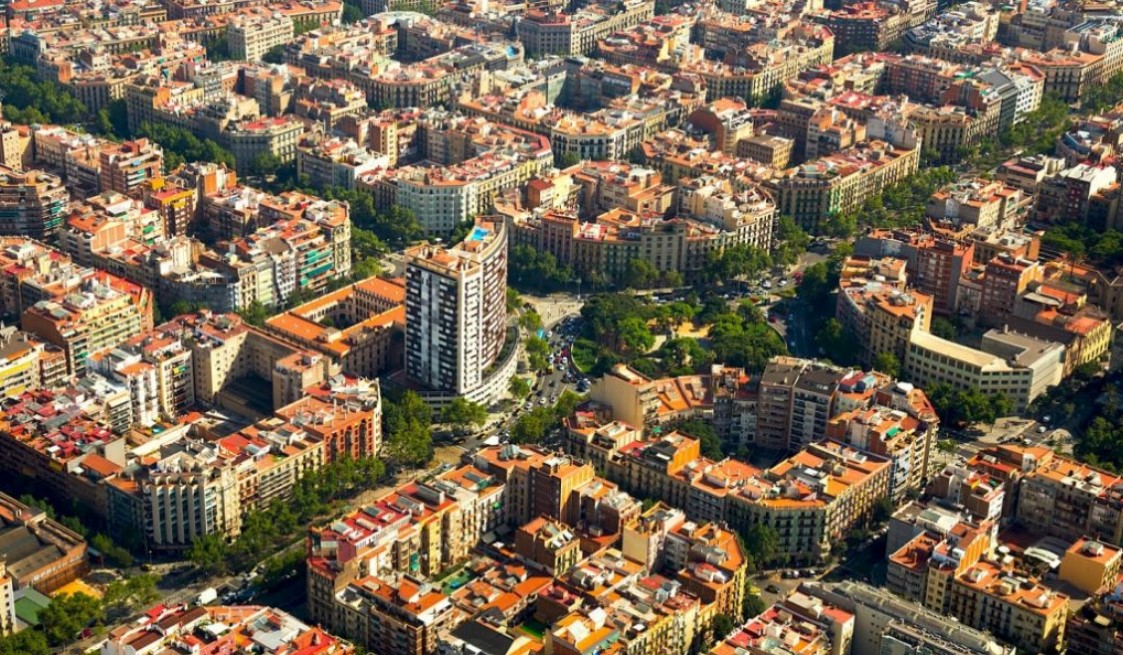 We all know trees and greening our cities is key. But how far is it really contributing to pollution reduction? How efficient are street trees as a Nature Based Solution? What species are the most suitable for street trees?

Let go beyond labels such as “greening the city” and understand how to assess the true “services and benefits” of green.

This blog post explores and explains you how to address the above mentioned questions  through the case study of Barcelona, and thanks to the support (and the lens of) i-Tree – a field-based assessment tool based on latest science and local data – we will discuss the usefulness of this tool in planning and manage the composition of urban greenery.

Which are the street trees benefits?

Planting trees is something we see in every city as a way of increasing the value of public spaces, while increasing ecosystem services.

The ecosystem services of urban green areas are well recognised: pollution and noise reduction, microclimate regulation, water retention, carbon storage. These are directly linked to economic, social and health benefits. For example, shadow and transportation produced by trees lower the temperature, which leads to energy saving (as less air conditioning is needed). Further, having greener streets stimulates social interactions when on hot days people gather in the places with a cooling effect of the urban greenery, reducing the risk of heat-related diseases (especially among the most vulnerable age groups). Furthermore, trees are a part of the natural and cultural heritage of a city, creating the unique city landscape. 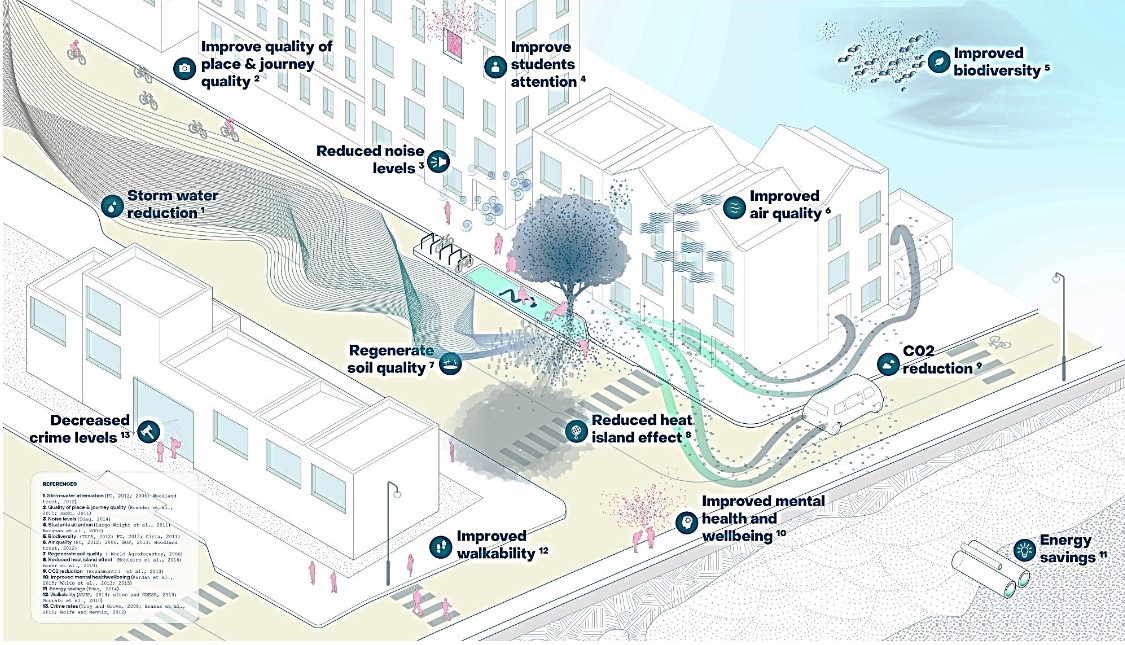 How (and which) green is Barcelona?

Published in 2011, the Street Tree Management document reports over 150,000 trees in the streets of Barcelona and highlights that their management is a city council priority. For many years the predominant species on the streets of Barcelona was the plane tree and this mono-culture made the city’s tree population much more vulnerable. In 1995 Barcelona City Council introduced a programme to replace certain species of street trees. One of its main goals was to increase diversity through the introduction of new species more adapted to the conditions of the urban environment. This goal is reflected in the gradual substitution of London planes (Platanus x acerifolia), which have only been conserved on big avenues and in emblematic spaces, and the replacement of certain problematic species unsuited to the city such as the Siberian elm (Ulmus pumila), box elder (Acer negundo), black locust (Robinia pseudoacacia) and tree of heaven (Ailanthus altissima). 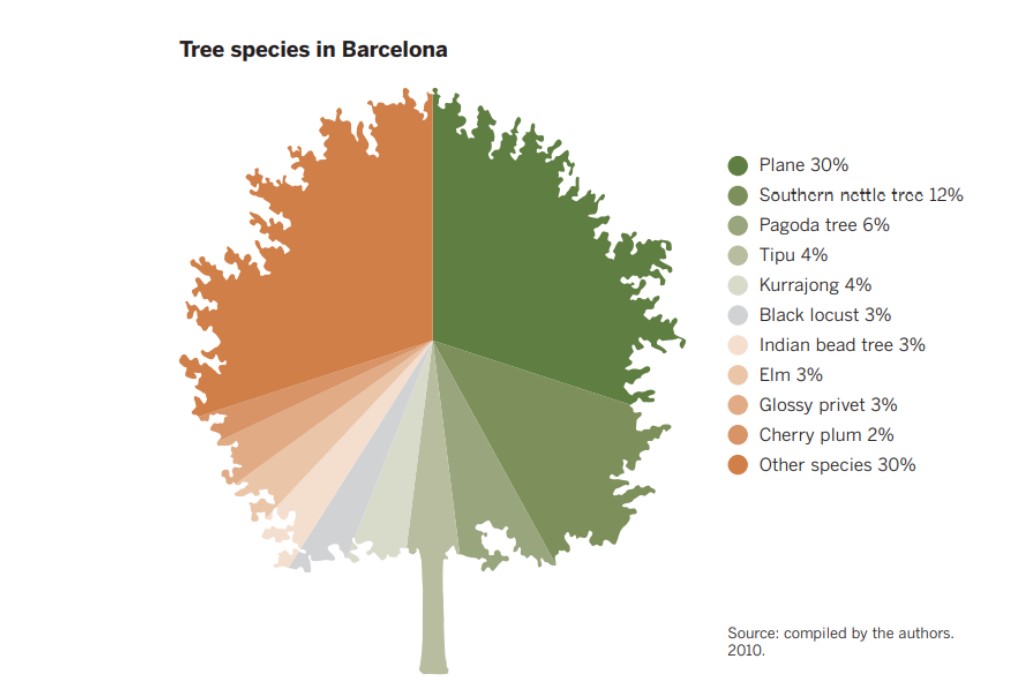 The Master Plan for Barcelona’s Trees “Trees for life” for 2017-2037 aims to increase the city’s tree cover by 5% in 20 years, to maximise social and economic benefits, creating a biodiverse, adaptive and resilient tree population.

The first step to achieve it is to collect proper data, because the knowledge about the current tree population is crucial to find what should be implemented in order to measure and thus consistently increase the quantity and quality of the provided ecosystem services.

By 2037, the city plans to nest at least 40% of its species adapted to climate change (an increase of the 10% compared to current species inventory) and to achieve a biodiverse tree heritage, in which no single tree species accounts for more than 15% of the total population within the urban area. By doing so, it aims to avoid mono-species populations, which make trees more vulnerable to pests and diseases, and thereby promote the resilience of tree`s ecosystem services.

This resilience goal needs to be balanced with the other goal of preserving the city tree heritage. Indeed, one of the most known images of Barcelona is the green grid of Eixample’s streets covered by thick tree canopy developed according to the XIX century Cerdà Plan and the iconic palm tree corridor leading towards Arco de Triunfo (image below) is a symbol of the Catalan capital, even though they are an introduced species.

How to measure tree ecosystem services? The I-Tree Eco software tested in Barcelona

Among other available tools, at the Msc. in City Resilience Design and Management we’ve been introduced and taught the I-Tree eco software. This assessment tool analyses the tree’s structure (including leaf area), function (carbon storage, avoided runoff, pollution removal and others), value and also pest risks and general health. It is a useful tool to understand the overall benefits of street trees and map the species of a specific area. In order to test it, we analysed two districts of Barcelona that have significant differences in terms of tree cover: Eixample and Gracia.

The Eixample is the modernist city expansion of Barcelona, having its own street tree management plan, dated back to 1998 and being the foundation of the current management plan for Barcelona trees. The architecture of the city is in favour of street trees that can thrive along wide avenues that were designed for the purpose of greening. Thanks to that, Eixample is the district  with the highest number of trees in Barcelona. On the contrary, Gracia’s narrow streets don’t offer much space to plant new trees nor let the older ones grow wide crowns. 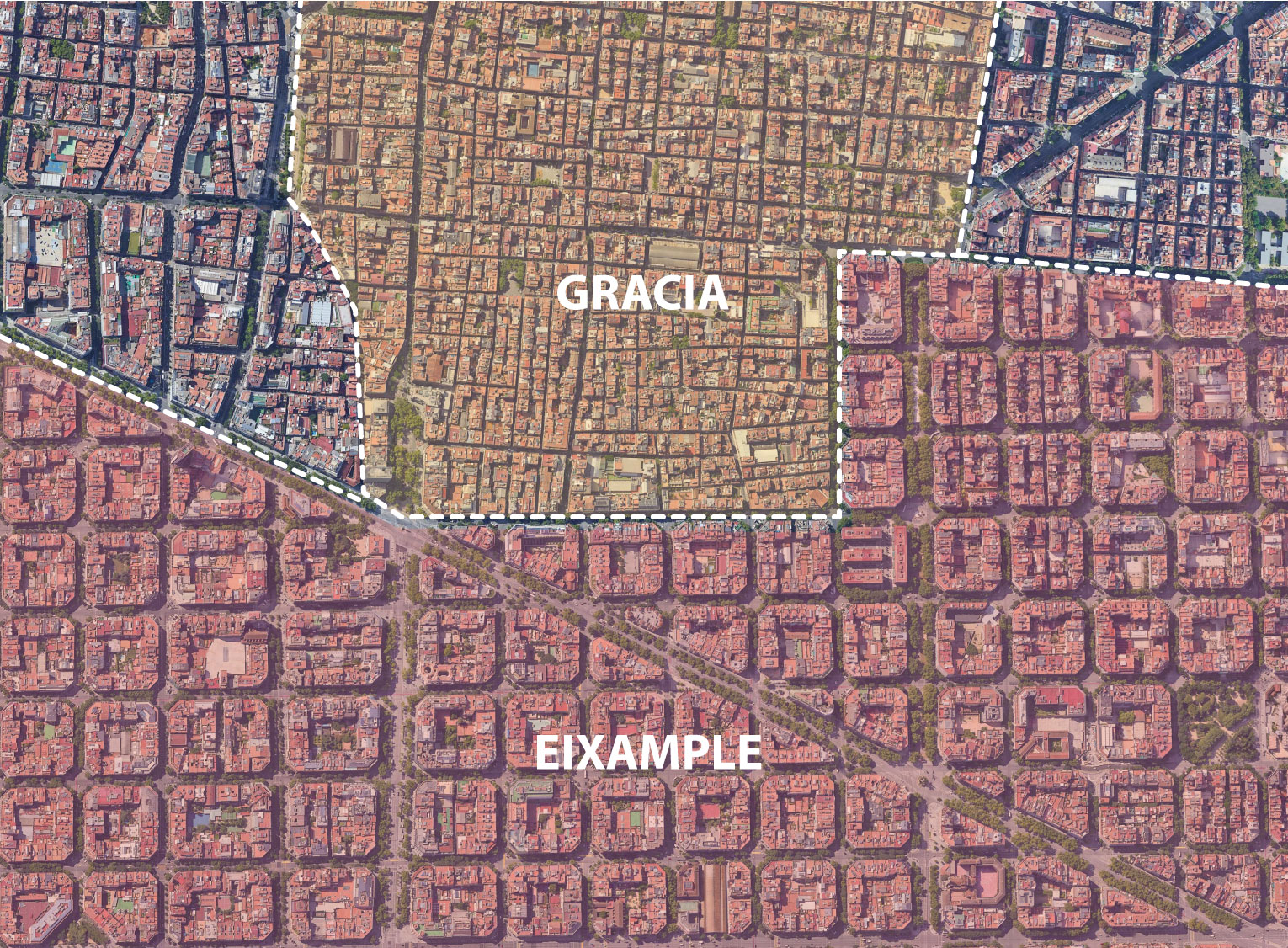 This can be seen in the results of i-Tree analysis that we performed (presented in the table below) The calculated tree cover is 8,6% in Eixample, while in Gracia only 3.6, with the overall tree density of 33 trees/ha for Eixample, versus less than 10% in Gracia.Although in both districts dominate trees with diameter of 45-60 cm, the larger share of trees with a large diameter (obviously) can be found in the Eixample. This indicates a bigger number of mature trees, meaning the  absorption of pollutants and provision of other ES is higher than in Gracia, as the older the tree, the higher capacity it has to contribute to environmental benefits.

In both districts the London planetree is a dominant species. It is especially common in the Eixample, presenting the 39,2% of the tree population. It’s not surprising, considering its resistance to urban challenges. This hybrid tree is resistant to air pollution, can grow on a poor quality soil and in a partial shade and it transplants easily. Similar characteristics are presented by the southern nettle tree, a native tree that’s second most common in Eixample (28,4%). In Gracia there can be found mostly non-native species, but compared to Eixample it’s more biodiverse – none of the species contributing to more than 16% of the population. The holm oak, the most common tree in the municipal area of Barcelona, is rare in the urban areas, which can suggest that it doesn’t adapt well there.

Comparison of the results

For the presentation of results, the monetary valuation of ecosystem services is a useful I-Tree function. To compare the districts more accurately, the value per hectare was calculated. Even though Eixample has only 5% more trees, the replacement value of the trees is almost three times bigger than in Gracia. The results indicate that the amount and value differ depending on the species and biomass structure. For example, trees in the two districts present different capacities of absorbing given pollutants.

However, trees are also a source of ecosystem disservices. One of them is the emission of volatile organic compounds (VOCs) which are precursor chemicals to ozone formation. In this case the emissions also vary among species based on their characteristics and the amount of leaf biomass. For instance in Gracia, 58% of VOC emissions were from London planetree and Glossy private, which are only 24% of the population. Lastr but not least, we detected and could share with you some limitations of the i-tree listed in this note

How to choose the right species?

There are 170 species of public trees in Barcelona, as we stated at the beginning, the aim for increasing the resilience of ecosystem services is that no species would account for more than 15% of the entire tree population. There is no need of choosing a dominant and most adapted and useful tree in cities, since maintaining a high level of biodiversity is key for resilience. However, we can get some key learning from the city experience and from the I-tree software.

In the 20th century, a high percentage of London plane trees were planted in the city centre of Barcelona. Though non-native, this species was chosen for its interesting properties of fast-growing speed, tolerant of atmospheric pollution and root compaction, amenable to various soils, which made it a good candidate. However, negatives were identified later on including urban the species hairs and dispersing seeds which are an irritant if breathed in, and can exacerbate breathing difficulties for people with asthma; or the large leaves difficult to dispose, as they are tough and sometimes can take more than one year to break down if they remain whole (i-Tree report).

Thus, the challenge to choose the right species is also based on the challenges posed by the urban factors such as microclimate, evolution of the city pollution and budget for maintenance (or other elements shown on the graphics below). 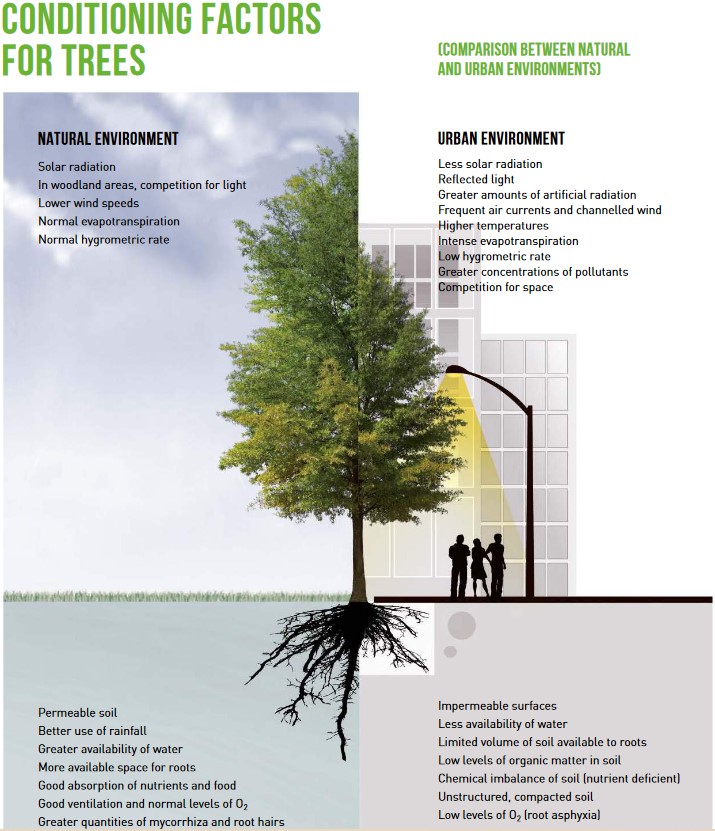 Several questions arise regarding future climate, such as in how many years will we be able to take advantage of the ecosystem services? What will the micro climate be like? What will be the shape of the crown, will it interfere with other infrastructure? Will the root system be strong enough to let the tree survive even extreme weather events?

The main conclusion from the findings that is linked to the “Trees for Life” Master plan is that choosing the right species might be the greatest challenge. The study showed the difficulty to choose the right species of trees to ensure diversity but also maximise environmental benefits. To achieve the biodiversity goal, the planners need to carefully choose the right species different from the dominant plane trees, especially in the districts with a larger share of mature trees, like Eixample.