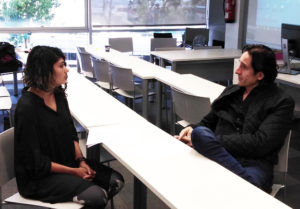 One of the interesting aspects of our program is also bridging different resilience perspectives and networks. It is interesting for us to explore how synergies among disaster, climate and community resilience(s), their principles, approaches and researches overlap and contribute to urban more sustainable and just futures. What better for introducing disaster resilience thus, than inviting here one of our senior Urban Resilience Research Net members, Gonzalo Lizarralde?

He is the founding member of i-Rec (the International network for improving post-disaster reconstruction), the director of the IF Research Group at the Université de Montréal, and the leader of the Disaster Resilience and Sustainable Reconstruction Research Alliance. His approach to disaster resilience is deeply linked to social justice and environmental degradation, and he has a vast experience in empirical research on Low-Cost Housing, linking resilience and sustainability.

During his staying, we had the pleasure to share his seminars with our colleagues from the Master of International Cooperation and Sustainable Emergency Architecture, and debate around the topic “Unnatural Disasters – Controversies in Low-Cost Housing and Post-Disaster Reconstruction”. But a part from these seminars, we tacckled the opportunity to interview him, and we are happy to report here to you our conversation with him on the need to align environmental issues and social justice, the importance of local knowledge and to hear the voices on the ground, and how debating can help us to challenge ideas that have been taken for granted.

At the start of your career, your research and publications focused on issues such as post-disaster housing including low cost housing and temporary housing. Can you explain how your research agenda changed through time, and why?

I started my career working in the field of post-disaster reconstruction and also wrote my PhD about this topic. And then I realized that there were strong connections between development and disaster. My initial interest for emergency situations and development after disaster through permanent reconstruction later on shifted more towards the effects of climate change. The latest work of our team, for example, has been concentrating on climate change response, including climate change adaptation in Latin America and the Carribean. Another aspect of my work from the beginning is the understanding of the processes of permanent transformation. So the common thread has been the idea that cities are transformed rapidly by disasters, but also by human action, and to understand those urban transformations over time through processes – processes at the project scale, but also at the level of urban change. 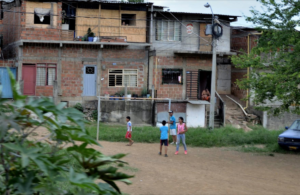 In your literature on post-disaster reconstruction projects in Port-au-Prince, Haiti, you write about the failure of the ‘Build back better’ and the connections between the current disaster coping capacity of affected countries and their political and economic conditions. You also emphasise the need to adjust the climate change discourse to the specific context of developing countries, and to associate the climate agenda and the social agenda. Often people will tell you that they need “bread for tomorrow”, they do not care about what is going to happen in 2050. How do we integrate basic needs responses (responsive-adaptive capacities) to long term transformative paths?

Just to be clear, low income communities in developing countries do think about the future, and what is going to happen in 2050. But their priorities might sometimes be different than those of agencies or scholars. For example, when we work with informal communities, we often hear the residents of informal settlement say: “We are sending our kids to school, that is the way to guarantee that the next generation will escape poverty.” That is also a way of thinking about the future. But you are right in pointing out that environmental aspects and social justice often do not correlate when it comes to future planning. And this is where the two agendas – the environmental/climate change agenda and the social justice agenda – enter in contradiction. Because, as you said, for many people the urgency of having something to eat tomorrow tops the urgency of thinking about increases in sea level rise in 2050. So this is where different ways of thinking about the future enter into conflict and if we do not align those two agendas, both of them will most likely fail. We need to understand that the fight against climate change needs to be connected to the fight for social justice. And for many members of informal communities in Latin America and the Caribbean, where we undertake our research, the fight for social justice is tied to the idea of preserving the environment and adapting to climate change. But it is correct that there is a gap between policies from top-down and the expectations and needs of the residents of low income communities, for example. And we will need to articulate both in a way that they respond to the interests, expectations and objectives of the stakeholders at large. We will have to integrate our interest to preserve the environment with the struggle for social justice, for employment, for food, for reducing inequalities, for increasing living conditions for the poorest sectors of society. And only if we are able to do that, we will have a chance of succeeding.

In relation to this, a professor from UCL recently launched a project in Latin America about Urban StoryTelling – where communities can share and transfer local knowledge through a platform, in order to bridge community perspectives, disaster, climate resilience and the development agenda. How far do you think local knowledge should drive the resilience building processes? What is the risk of getting into maladaptive practices, driven by biased, group or people centric, unsustainable practices or power dissymmetry?

This is a very good question, because disaster research and practice has been largely influenced by ideas and concepts that evolved in developed countries, let’s call it the Global North, and usually applied without proper contextualization in low income countries – or the Global South. And this has exacerbated the differences between the two. And with regard to disasters, disaster studies, disaster practices, when we export these ideas from the North and implement them in the South,this often happens at the expense of local knowledge that is crucial to understand what is going on. And yes, I certainly argue that we need to be able to find other references and other narratives that can help us fight climate change, for example, and that will also support disaster risk reduction. We need to explore what those local narratives are. And I certainly agree with my colleagues from UCL, and many other universities as well, that there is a need to hear the voices from the ground, in order to integrate the climate agenda with the social justice agenda. And unfortunately, we are not always doing this to the extent that we should. We sometimes use frameworks, concepts and ideas from the North to deal with problems in the South, without realizing that maybe we should start exploring these disasters, inequalities, and effects of climate change by listening to the communities themselves, and the social groups that we want to benefit. Therefore, I would certainly agree with my colleagues that a better integration of local narratives is one of the key aspects of the disaster risk reduction agenda in the coming years. It is something we focus on in our adaptation project for Latin America and the Caribbean. And it is certainly also required in other parts of the world, in Africa, in Asia. When we start revealing those narratives, we understand that there is a different way of reading the problems that we sometimes underestimate in our projects. 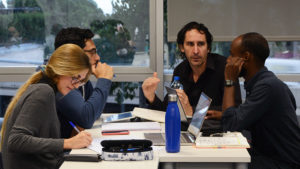 You are the moderator of a series of online debates that challenge and examine common controversies around disaster resilience. These online debates are a valuable tool for knowledge sharing and engaging both professionals and practitioners around the world, and you are also using debates as a teaching method, in order to question students preconceived ideas. This is indeed really effective to train critical capacities. What motivations led to the creation of this online platform, and what have been the most significant and surprising outcomes of the debates so far? To what degree do you consider the ability of producing a convincing argument, exploring complex issues, and mediating an important skill for the new generation of urban resilience thinker?

One of my main concerns is that we are perpetrating the use of what I call prefabricated frameworks of ethical reasoning. You can also call them paradigms, or slogans that we disseminate among students of architecture, urban planning, and design professionals. For example, we teach sustainability and sustainable development without challenging its value or its pertinence in a certain context. We do this with resilience, with community participation, or with innovation. This is how the idea for the debates was born. We take concepts such as sustainability, resilience, land titles, or innovation in housing construction, and we challenge them through debates and explore whether they have an intrinsic value or not. We try to position the pro and cons, just to polarize the debate a little. But the aim is to create a more sophisticated reflection of those concepts by finding common ground, by finding the main differences that we need to include, and also by discovering which concepts are not essential. The debates have also become a teaching method. I run debates with my students at the university in Montreal, and also here at UIC Barcelona. It forces all of us to think critically about ideas. For example, sustainability: we deconstruct the idea, then we build something new to understand the relationship between humans and ecosystems. These practices also remind us of the importance of a specific judgment and a contextual judgment. Instead of having solutions that can be applied everywhere, we realize that solutions are only pertinent in certain contexts, and sometimes, some solutions do not have any intrinsic value at all. The value depends on the perception of stakeholders, and the relevance to the context. And I think this is very important nowadays, because every five years there is a new slogan. We jump on it without thinking about it critically. And by doing that, we are failing to adapt solutions to the context. We are failing to see other understandings of subjects emerging from the ground. We are not really creating a social debate. We need more social debates and spaces, where we can debate and look at these controversies, unpack them, and create new understandings. 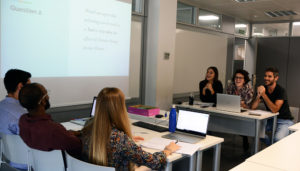 We hope we have unpacked a lot during the debates that we have conducted here during the program. How would you conclude the outcome of these debates, among us, as a small but international group of multidisciplinary students?

I loved it. I think it was fantastic. It was very intense because we only had four days. But we were still able to delve deep into several issues. The research was very pertinent, we gathered interesting new data to feed these discussions. And I think it was a learning exercise for all of us. I learned a lot of things here through these debates. I hope you guys also learned a lot. And it also reminds us how our perspectives of the same thing can be so different. And respecting those differences is important, and recognizing through empathy that the other person can have a valid argument as well. I may not agree with that argument at the beginning but I can respect it and start understanding what that argument means from the other side of the debate. I think we had some very successful debates this week.