Community resilience and co-production of adaptation strategies: when participation goes beyond consultation

As we already explored in the most recent contents shared with you here through the blog, cities are increasingly forced to develop adaptation strategies to cope with climate instability and extremes. Many experts from different areas, researchers and decision makers agree that successful and long term implementation of adaptive and transformative strategies could be guaranteed only through trans-disciplinary approaches: meaning involving all the stakeholders to be active part of the transition, putting together their capacities to co-define innovative and creative solutions. This is the theory. What about practices?

This question has been answered in a recent seminar held by the master during the community resilience module, discussing about which are the factors that play a crucial role in defining how and why different stakeholders could be involved or excluded when adaptation strategies need to be designed and implemented. 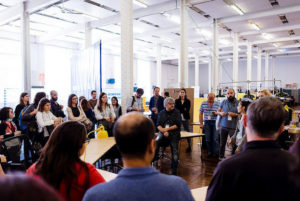 Isabel Ruiz Mallén was our invited keynote, member of the TURBA Lab (Urban Transformation and Global Change Laboratory) research group at the UOC (Universitat Oberta de Catalunya). She is a recognized international scholar working on participative learning processes (and co-creation methodologies) in the areas of sustainability and resilience. Thrilled to have the opportunity to explore with her possible synergies, mismatches, barriers and driving forces for urban resilience co-production, we started by exploring what community resilience really means, and why communities’ perceptions, knowledge, values and actions do matter when addressing city resilience management challenges.

The first step is to understand how to define the community. When we try to do that, we are forced to consider which are the “limits” (both physical and social) of this groups of people identified as (part of a) community. Indeed, communities are never homogeneous nor isolated entities: “most communities are too diffuse, boundaries are much too porous, and many people make their livelihoods outside the immediate geographic area” – introduced Isabel -”Thus, the way we define it, will end up shaping the results”.

We talk about a “resilient community” when it is (self)organized and able to take or lead actions. The image below (from Berkes & Ross 2013) gives a quite clear overview of how community resilience is framed in terms of agency and self-organization. You could easily identify the “strengths” or characteristics necessary to get there, in relation to: social networks, learning capacity, knowledge and skills, specific values and beliefs, community infrastructure.

Jumping right into a practical example, Isabel referred to a research analysing the responses to California fires in 2003, exploring how, as an alternative (or complementary) approach to centralized fire management agencies, community organizations came together and, with the support of government agencies, set up the San Diego Fire Recovery Network. This informal network contributed to community resilience by gathering and providing access to GIS-data, to diversify possible responses to environmental change and uncertainty (Goldstein, B. E. 2008). This is both a process responding to an emergency, thus providing a “service” from community to the society, but also a learning process in itself, on how to better bridge people across scales and knowledge domains. We could consider any community-based adaptive responses to shock and stresses as a form of social learning, that can lead to increased livelihood options while providing flexibility along the governance process. It is also and certainly about ownership, and making sure people contribution in co-designing or co-managing any adaptive response has an impact both on the process itself (contributing to make it more open, accountable, multi-perspective, multiscale etc) and on the output (which actually could be reached through consensus and thus better accepted).

The scale factor is also playing a key role when addressing community resilience and urban transformation. As for the Panarchy model representing systems evolution cycles (the resilience adaptive cycle firstly introduced by Buzz Holling, similarly to the “economy of creative destruction” – growth been shaped by cycles of economic innovation, exploitation, failure and renewal – introduced by Schumpeter) transformative changes are more likely to happen at small scales (as innovations), informing – and fighting among them – for influencing upper scales changes.

Because of that, lots of community resilience examples start (and most of the times stay) at local, small scale level. Isabel brought some examples of community-led initiatives from Seville and Barcelona, which have been identified and analysed through the RESCITIES research project led by the TURBA Lab. In Seville, students from the university and citizens’ associations came together for the Torreblanca verde project, where they joined efforts to re-naturalize the neighbourhood. This was done through a series of greening and agroecology initiatives, that contribute to improve the microclimate and thus reduce the heat island effect, allowing also greater permeability of the soil which facilitates a better control of rainwater runoff (thus reducing flooding risks). In this way, community resilience was expressed through some risk-reduction related outcomes (heatwave resilience and flooding resilience) while enhancing social ties, capacities and knowledge about the climate and environment. Other initiatives, like Bioclimatiza tu cole (led by Cotidiana) tackled hydro-climatic risks through bioclimatic architecture, and looking at educational centres as possible mitigators of heatwaves. 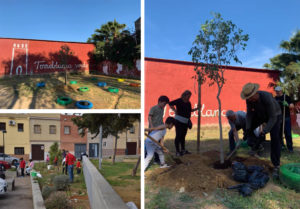 On the same page, we can find some inspiring examples in Barcelona too, aiming to raise awareness, carry out sensibilization to certain issues, like the delicate situation of people living on the street, and suffering, among other things, to extreme hot or cold events. The initiative Nadie durmiendo en la calle (nobody sleeping on the street) from Arrels Fundació is trying to activate some transition from specific emergency responses towards more inclusive policies that look at the medium and long term. Specifically, they propose to set up more proximity centres & spaces, located in each neighbourhood and that offer basic services, while working towards and looking for more stable accommodation solutions.

A great example coming from Barcelona and enhancing community resilience through public-to-public partnership was the PLA BUITS (Urban Vacant Lots with Territorial and Social Involvement). This was a co-management program launched (in 2012) in the light of the economic crisis of 2008. The municipality awarded the temporary self-management of vacant plots (for 3 years) to the best consortium of public or private entities, citizens and no-profit associations, with the aim of boosting public uses and avoiding social exclusion. This has been the inception of the first co-management contracts for involving neighbourhood associations – and people – in the management of open-air public spaces, offering the opportunity to different stakeholders in the regeneration and revitalization of marginalized spaces of the city. A variety of activities and initiatives boosted in these spaces urban gardens, events, local markets, educational activities or bikes workshops (as showed in the image below). The program offered a dozen of spaces through two editions, from 2013 to 2018, and is now successfully framing a more open and inclusive management of public spaces.

Nowadays, in most of the countries, cities have started working on the co-creation of climate plans establishing partnerships with public and private sectors, involving civil society. As you can read from the paper Isabel referred to (do read Wamsler 2017) in one of her publications (Co-production and Resilient Cities to Climate Change), its findings from Munich and Lomma case studies reveal how motivated civil servants in the corresponding municipalities initiated such co-production processes: they included stakeholders at the local government by relying on existing institutional structures supporting cooperation between the different departments and sectors, and invited researchers thanks to previous collaborations in other projects. However, In Munich, citizens seemed to be deliberately excluded, and neighboring municipalities were not involved because previous collaboration with the civil servants leading the process did not exist. In Lomma although neighboring municipalities and vulnerable groups of citizens were involved through a joint council to discuss their needs and interests, they reached a low level of participation, due to lack of time and capacity to engage them. A last example mentioned was very close to us, coming from the Pla Clima co-production process, in Barcelona. Here a series of workshops opened to general public were combined with the use of the open platform Decidim (we decide), in order to involve local stakeholders along the decision-making process. A part of civil servants, also private companies, civil society organizations and individual citizens had the opportunity to actively participate through 2 initial workshops, and collectively reflect on climate change risks and vulnerabilities in the city, proposing and discussing adaptation measures and establishing priorities. Those proposal were then uploaded on the platform Decidim, together with the ones from people who could not attend the meetings. The involvement of individual citizens was limited, maybe due to the municipality’s tight agenda, absence of a proper information and communication campaign, and because the process being carried out during the summer period. 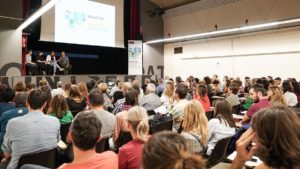 However, learning from that – not very successful experience in terms of lay citizens’ engagement – the second participatory process organized to prioritize key actions to respond to the Climate Emergency, was actually able to gather more than 300 associations (generating thousands of different points of view). The funny thing is to see how every success implies improvement, and generate new challenges. Indeed, during this second participatory process, because now the city council engaged 300 participants, they faced the huge organizational challenge, about how to listen, categorize and make sense of all those inputs. This is a mission impossible if you think you can do that by organizing 3 gathering events, of just 2h each, addressing 12 topics. The main learning from this was that it is not enough to be successful in calling people and gathering different knowledge around a big table, but you need to develop the capacities, tools and mechanisms for enabling “meaningful” participation processes, and deliver in an accountable and transparent manner how these feed the decision making process.

Resilience governance and decision-making systems span across several scales, sectors and multiple stakeholders, and need to consider how some measures may affect diverse groups in different ways. Being able to recognize the value of informal networks in fostering transformative actions is essential. At the implementation phase, activating local responses requires coordination between all the parties, that can only be realized if the appropriate institutional mechanisms are in place. Co-production and co-management processes have the potential to achieve consensual agreements that can better meet diversified needs and expectations, while ensuring social and economic equity.