Marta Olazabal, co-founder of the Urban Resilience Researchers Network and lead researcher of the Adaptation Research Group at the Basque Centre for Climate Change, has produced a set of metrics to analyse the strength and efficiency of national and city mitigation and adaptation plans. Using her assessment tools, as well Sara Meerow and Sierra Woodruff’s ‘seven principles’, we analyse the strength of Medellin’s adaptation planning.

In a recent report titled ‘The Climate Disaster is Here’ published by The Guardian, an estimated 216 million people mainly from developing countries will be forced to flee their homes and areas of residence due to increased storms, heatwaves, flooding and drought as a result of rising temperatures. With some of the most severe environmental impacts centred on water – from rising sea levels to river surges and increased rainfall – coastal countries are particularly vulnerable.

Since the beginning of November 2021, videos and photos of Medellin, Colombia have populated social media platforms, portraying the recent fluvial and pluvial emergency flooding sinking the city. The footage shows strong currents enveloping streets and dragging pedestrians, vehicles and the belongings of commercial spaces (tables, chairs and other similar furnishings). At the time of writing, 14 November 2021, about 30 houses have been affected, with highly vulnerable areas including Santo Domingo and La Avanzada. Public transportation and businesses have completely ceased activity.

According to the 2019 OECD report, it is almost certain that cities will experience one meter of sea level rise by 2100, regardless of the adaptation and mitigation actions taken from now until then. Even if nations succeed in limiting global temperature rises to the 1.5C goal, the greenhouse gas emissions that have already been produced and stored in the atmosphere will continue to impact the earth’s climate. However, there has been some progress lately, with countries and cities developing strategies to cope with and thrive in the climate change era.

This article intends to illustrate how adaptation strategies are being applied in Medellin, and measure such efforts using a combination of the assessment tools published by Marta Olazabal, co-founder of the Urban Resilience Researchers Network and lead researcher of the Adaptation Research Group at the Basque Centre for Climate Change, as well as the key principles of climate change planning published by US-based assistant professors Sara Meerow and Sierra C Woodruff. The article also offers areas for improvement regarding the adaptive capacities and resilience of the city.

Though mitigation and adaptation are the two main approaches to climate change planning, there are distinct differences between the two – while mitigation refers to the minimising or controlling of harmful behaviours to alleviate future impacts of climate change, adaptation proposes actions that respond to the impacts already being felt today.

According to Olazabal’s paper, ‘Adaptation planning in large cities is unlikely to be effective’, mitigation and adaptation policies should include a diagnosis (inventories, estimations, or risk and vulnerability assessments), a portfolio of measures (technical and economic aspects and resources for implementation), an assessment of measures (using environmental, social and economic criteria), and a definition of a monitoring and evaluation system. These coincide and overlap with key components highlighted by Meerow and Woodruff in their paper, ‘Seven Principles of Strong Climate Change Planning’, which lists several elements that should be included in mitigation and adaptation planning.

The seven principles are: setting ambitious but attainable goals, providing a strong fact base with the best available data, outlining diverse strategies to achieve mentioned goals, engaging the public and fostering justice in processes, coordinating efforts to address climate change across all actors, including a clear process for implementation and monitoring, and addressing climate change uncertainty. 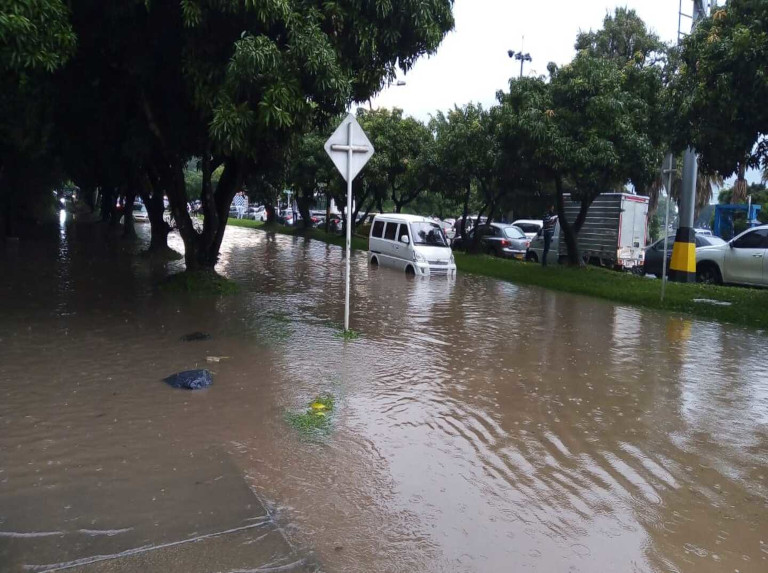 Flooding in Medellin in May 2021, source.

Lastly, it is critical for mitigation and/or adaptation plans to demonstrate credibility (political, economic, technical, etc), by communicating indicators such as funding, consistency and timing. An outline for MERL (monitoring, evaluation, reporting and learning) processes is also essential.

Using these principles and components, we reviewed Medellin’s adaptation plan published in 2020, and analysed its strength, particularly in light of the ongoing flooding and landslides threatening the country.

Medellin’s Adaptation Plan – The Pros and the Flaws

When analyzing climate change impacts on Medellin, there are two key factors that need to be considered: the city’s geomorphological characteristics (steep slopes and low points that are more vulnerable), and the increasing levels of high-intensity and long-lasting rainfalls.

Taken and planned actions seek to respond to potential scenarios surrounding vulnerability and risk, while at the same time, aiming to improve the quality of life for the citizens. Such objectives include physical, social and economical adaptation against climate change impacts and building resilience. A consortium of different parties is involved in the process, including the Departamento Administrativo de Gestión del Riesgo de Desastres, the Departamento Administrativo de Planeación and the Secretaría de Medio Ambiente. All three work with Agenda Medellin indicators.

Medellin’s Plan for Climate Change outlines a series of actions to be implemented by 2050. Below is a summary of the plan’s actions and their objectives.

Medellin’s strategies are aligned with the needs of the city and its citizens, and the majority of the principles that were used as assessment parameters are apparent in the city’s climate adaptation plan. All six actions can be drawn back to Meerow’s key principles: they are ambitious but feasible, and there is a strong fact base supported by data (figure 1), diverse strategies have been outlined, and there is proven public and private engagement. According to the plan, the municipality has carried out a process of surveying the community, academia, private stakeholders and NGOs that advocate for climate change action.

Nevertheless, it is concerning to see that the actions being implemented might not be carried out soon enough. As recent events have illustrated how impactful natural disaster events are across Colombia, we question whether these solutions can have a positive impact on the quality of life for the citizens of Medellin today. With fluvial and pluvial floods becoming more common and severe: Is the timeframe 2020 to 2050 in line with the risk that Medellin is facing?

Also, funding from private stakeholders lacks any clear assignment per action, leading us to wonder if such actions are financially feasible. And with the mayor recently asking for donations for the people of Medellin following the recent flooding, it seems the city might not have any emergency funding source to support the immediate needs of its people following shocks and stresses.

Although Colombia is a developing country, its GDP has been steadily increasing over the past decade. Therefore, it should be an increasing focus among national and local governments to prioritise new funds for Medellin’s emergency response to flooding and landslides.

It is a positive sign to see a comprehensive climate action plan that features a number of key principles for Medellin. However, the climate action plan must be embedded within larger national-scale plans, as this might lead to more funding, as well as collaboration across different stakeholders, communities and NGOS.

While the actions outlined in the climate action plan appear to be well-directed, their implementation will likely be slow without a clear assignment of funding. Shortening the time frame, however, might positively impact the implementation of the actions, which could be considered as the plan is updated during future review cycles.